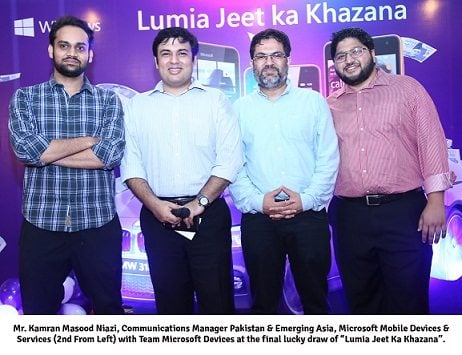 Microsoft Mobile Devices & Services Pakistan has successfully concluded the national campaign of “Lumia Jeet Ka Khazana” with the announcement of winners of the second and final lucky draw. The draw was held on June 29th, 2015 where the winner of the grand prize, a brand new BMW 2016 Model 318i, was announced followed by the winners of 10 prizes of PKR 100,000, and two prizes of PKR 500,000 during the draw proceedings. 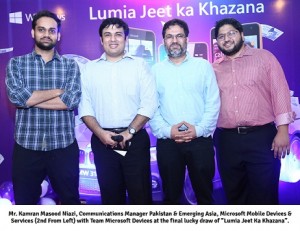 Kamran Masood Niazi, Communication Manager for Pakistan and Emerging Asia said “We are overwhelmed with the response we’ve received from Lumia Jeet Ka Khazana. The latest portfolio of devices launched recently such as Microsoft Lumia 640XL, Microsoft Lumia 540 Dual SIM (DS) and Microsoft Lumia 430 Dual SIM (DS) is a testament to our commitment to the growing Windows phone community of bringing the most innovative products at most affordable rates. This campaign was first of its kind by a phone manufacturer where we introduced the latest BMW 2016 Model 318i and other lucrative cash prizes. I congratulate Mr. Umair on winning this luxurious car and the rest of the winners. Microsoft has always cared for its loyal customers by bringing new offers that excite them. Through this campaign, we have given back to the windows phone users for their ultimate support and loyalty towards Microsoft Mobile Devices”.

An independent third party audit firm was also taken on board by Microsoft Mobile Devices & Services Pakistan to ensure the legitimacy of the campaign whereby lucky draw process was being scrutinized under its watchful eye to ensure that the distribution of prizes to the winners is absolutely transparent.