The automotive industry is one of the oldest and most lucrative industries in Pakistan. The industry has significant effects on sectors such as petroleum, steel and employment et al. Carmudi, Pakistan’s leading online vehicle marketplace looked into the history of the automobile industry, and the many ways it has contributed to Pakistan’s economy throughout the years, as well as identifying the numerous ways in which it has a potential to grow.

Currently, there are 3,200 automotive manufacturing plants with an investment of Rs. 92 billion, employing 1.8 million people and producing annually 1.8 million motorcycles and 200,000 vehicles. Its contribution to the national exchequer is nearly 50 billion, or roughly 3% of the GDP. The sector, as a whole, provides employment to 3.5 million people and plays a pivotal role in promoting the growth of the vendor industry. After the oil and petroleum sector, the auto industry sector in Pakistan is the second largest taxpayer in the country. Currently, the average capacity utilization of the car industry remains at 47%. Its contribution to the government’s revenue is around Rs. 7.5 billion, and foreign exchange savings at $96 million.

Presently three major players dominate the market: Pak Suzuki Motor Co. Ltd, Indus Motors (Toyota) and Honda Atlas Motors. Pak Suzuki Motor Co. has an almost complete monopoly in the small car segment. It faces almost no competition other than the odd, now discontinued Daihatsu Cuore, produced by Indus Motors. The 1600 Auto Parts Manufacturer Plants produce a wide variety of parts, which are used by car assemblers in the vehicles assembled in Pakistan, and form the foundation of the industry. Depending on a type of Passenger Cars, 55% ~70% of the vehicle parts are being locally manufactured in the country.

‘We are very proud that Carmudi Pakistan contributes to this growth in the auto industry. We are a company that is still relatively new in the market, however, this is a domain that has a lot of room for development. E-commerce in Pakistan is booming and being an online platform for buying and selling vehicles conveniently shall only prove to benefit the consumers as well as producers in the country in the coming years.’ – Raja Murad Khan, Managing Director at Carmudi Pakistan.

Pakistan has the 6th largest population in the world, and with a young population of 180 million people the demand for automobiles has a huge potential to rise in the coming years, especially given the increasing infrastructure and development taking place in the major cities of the country, making owning a car a necessity in this day and age. 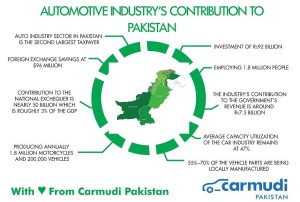 A smartphone created to make your routine colorful and power-packed