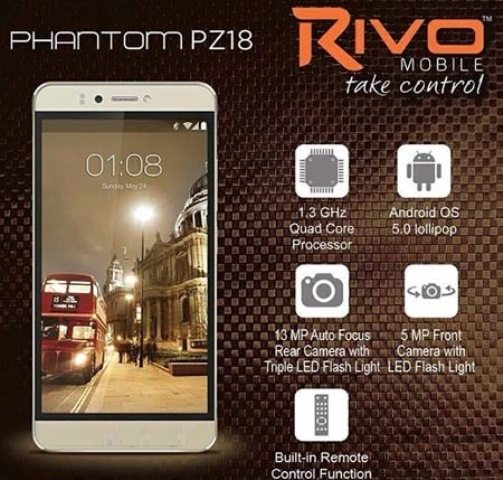 As Rivo Mobile continues to wow consumers with superbly powerful, high-performance handsets at affordable prices, the newest member of the Phantom family is the PZ18.

A combination of the best technology currently on the market, the most up-to-date software and looks that mesmerize, the PZ18 comes loaded with the latest version of Android, Lollipop 5.0. Then there’s the hardware, and this is where the PZ18 really comes into its own! For starters, the PZ18 is equipped with 2 GBs of RAM and a quad core 1.3 GHz processor that’s lightning-fast at multitasking, processing, and overall usage.

Its graphics capabilities are top-notch thanks to a Mali400-MP2 GPU clocked at 500 MHz with video decode and encode ability of 1080p at 30fps. To get the most out of all this, the PZ18’s display is a 5.3 inch HD IPS offering 16.7 million display colors and a resolution up to 720×1280. To store all your apps, HD movies, and games, the PZ18 includes a colossal 16 GBs of internal storage space. This can be expanded by a further 32 GB using a microSD card.

And with the rising trend of using cell phones to shoot not only selfies but indeed full-fledged hi-tech photography, the PZ18 really packs a punch where the camera is concerned. The main camera is a cutting-edge 13 MP camera armed with an F2.0, 5P Glass, Sapphire lens, and a 1/3.2” CMOS sensor. Furthermore, the camera also includes a revolutionary three-LED flash that’s stronger and brighter than ever! The front camera is a full 5 MP and includes a large front camera ring for better, wider selfies and yet another LED flash.

The remaining features are no less impressive, including 3G connectivity, remote control functionality, and a solid 2500 mAh battery. Finally, the PZ18 is a design spectacle! At just 8.25mm thick, this is one of the slimmest, sleekest phones yet by Rivo Mobile.