WWF-Pakistan and Fauji Fertilizer Company partner for the conservation

The agreement between the two was signed in a ceremony organized at the FFC headquarters in Islamabad.  FFC has committed to supporting dolphin conservation for one year initially. However, the project may be extended to three years. 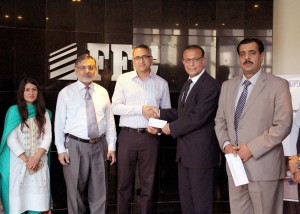 Speaking on the occasion Brig (Retd) Munawar Hayat Khan Niazi, Senior Manager FFC– CSR said that FFC-CSR program has a history of being proud partners with WWF-Pakistan on various environmental conservation programs. The engagement of FFC in Indus River Dolphin Conservation Program (IRDCP) with WWF -Pakistan is a true reflection of the company’s concern for a sustainable environment, he added.

While, Hammad Naqi Khan, Director General WWF-Pakistan said that Indus River dolphin is facing multiple threats which need to be addressed on the continuous basis. He further remarked that this bilateral partnership would contribute and further strengthen the Indus River dolphin conservation program.

“Partnerships with other stakeholders are also essential which can help in highlighting conservation issues, addressing environmental challenges, providing new opportunities and benefitting the biodiversity in the long run,” he added.

There are only five species of freshwater dolphins found in the larger river systems of the world today. The Indus River in Pakistan is home to the rarest species of river dolphin; where a population of about 1,452 dolphins is distributed between Chashma and Kotri barrages.  The Indus river dolphin is considered the most threatened species as its population is highly fragmented due to the construction of water regulatory barrages.  In 1974 the government of Sindh declared a 200km river stretch between Guddu and Sukkur barrages as the Indus Dolphin Game Reserve as this section the river hosts the largest population of this charismatic and unique species.  FFC’s support will allow WWF-Pakistan to monitor canals and rivers for stranded dolphins, social mobilization in adjacent localities, a rescue helpline, the rescue of stranded dolphins, upgrade and operationalization of the Indus Dolphin Conservation and Information Centre (Sukkur) and promotion of awareness on dolphins through tours and safaris for the general public.