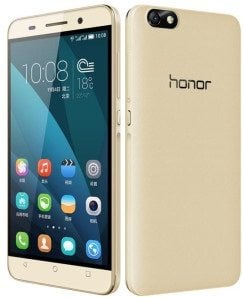 Honor 4X is the modern prodigy of Huawei carrying 5.5 inches large display screen with the resolution of 1280×720 pixels. With the latest Android 4.4 Lollipop OS, EMUI 3.0 and 64-Bit, 1.2 GHz Octa-core processor, Honor 4X is the utterly powered smart phone which delivers 40% better performance than other smart phones. Honor 4X is a smart phone which has got versatile features that cater to the necessities to the users of all walks of life, for example, for gamers Honor 4X has incredibly exclusive content of Game Loft.

Huawei’s Honor 4X is a Dual micro SIM smart phone which possesses 2GB RAM, 8GB ROM and memory expandable up to 32GB. With its 4G compatibility, delivers best wireless connectivity and the 1050 LTE/EPC patents guarantee, smooth and seamless communication all the time.

Camera quality of Honor 4X is yet another exciting feature of it, with the vibrant and colorful screen, 0.6 s shutter speed,  none of the valuable moments would be missed and the pictures captured through 13 MP primary and the 5MP front camera is life-like and spells bounding. Huawei has loaded immense battery power in Honor 4X i.e. 3000 mAh with the latest power saving technology, this smart phone’s battery will last for 48 hours, even on the busiest days and on it will last for 7days on Ultra Power mode, now these are certainly those features which would make Honor 4X outshine among all.

Huawei’s Marketing Country Head, Mr. Fraz M. Khan has said, “Following our tradition of introducing quality and strikingly attractive products, we have launched Honor 4X in the Pakistan Mobile market. This smart phone is the company’s latest prodigy in Honor Series and we are very hopeful that this smart phone like predecessors would be a successful product.”