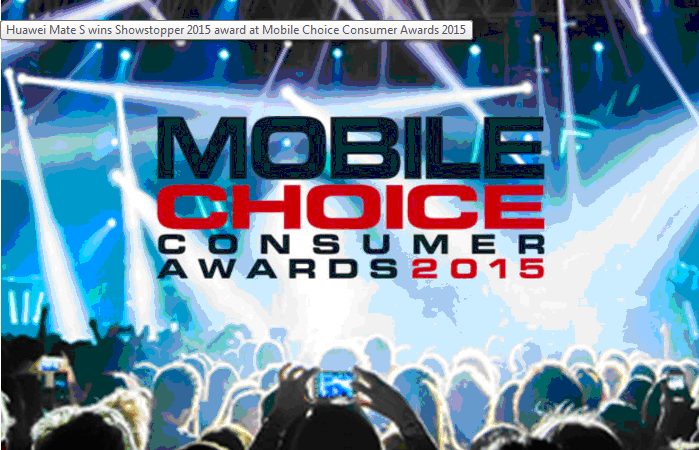 Mobile Choice Consumer Awards are annually organized by the UK’s well-acclaimed magazine, which covers news, opinions, and reviews about tablets, apps, accessories and specifically mobile phones. Awards are given to mobile phones, apps, etc based upon the decisions of the panel of experts and readers’ vote. In the year, 2015, Huawei’s recently launched flagship smart phone, Mate S has grabbed the “Show-stopper Award”.

This incredible device of Huawei Technologies was launched in the first week of September at IFA, Berlin. Huawei Mate S became an instant hit and earned acclaim world over by tech critics and enthusiasts. The sales growth of Huawei also underwent a significant boost after Mate S launch, which exhibited that Mate S has been very well received by the smart phone customers across the globe.This smart phone features a Powerful Touch screen, a feature which has revolutionized the ways of using a smart phone. Huawei’s Mate S has a plethora of unique and mesmerizing features to flaunt, like Touch Sensitive screen, advanced fingerprint scanner, water-resistance technology, and a cutting edge camera.

The “Show-stopper 2015” is absolutely an amazing accolade won by Huawei’s Mate S because of its fascinating and beautiful design. Over the years this award has been given to jaw-dropping smart phone beauties which had been conquered the hearts and minds of technology bloggers, industry analysts, and reviewers all over the world. As Huawei has made its way successfully in the high-end smart phone market, the company has made an extraordinary entry with Mate S. This device was immensely anticipated long before its launch and it certainly left the viewer awe-struck and spellbound on its launch. This mega smart phone has obviously shown to the world that now Huawei is in the game and it is aiming to get its hands on the crown by becoming the king of the high-end smart phone world.