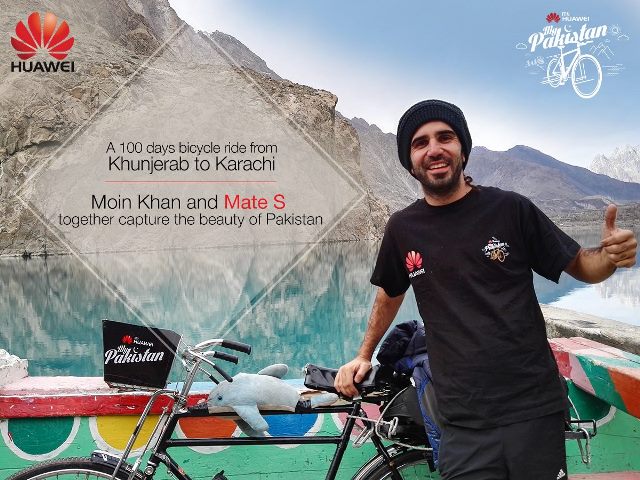 A Remarkable Journey of an Avid Traveler and Huawei Mate S

A Remarkable Journey of an Avid Traveler and Huawei Mate S

“We are all connected by a love for travel”.Travelling is a passion, common to all and Huawei and Moin Khan is going to embark upon an unforgettable journey, visiting and capturing, the heavenly places in Pakistan. Moin Khan is a well-known traveler, particularly famous for his motorcycle ride, all the way from Golden Gate Bridge San Francisco, California to Lahore, Pakistan. He has previously worked on remarkable travel campaigns, bringing a sensational and encouragingly bright face of Pakistan, for the whole world to see.

Now, Huawei and Moin Khan together will set for a bicycle ride, all the way from Khunjerab Pass to Karachi. Driven by his passion for traveling, Moin Khan, with his “Mate S” will commence his fascinating and inspiring travel campaign named, “My Huawei My Pakistan”. He will ride through different cities of Pakistan during his travel campaign, in 100 days.

Through this enchanting travel campaign, Huawei and Moin Khan would play a significant role in promoting the beauty of Pakistan. With the extraordinary, high pixel and top quality camera of Huawei Mate S, Moin Khan would seize spell bounding moments; make exciting and interesting videos, during his travel. Mate S is the flagship smart phone of Huawei which has been revealed to the world, a couple of months ago and it has secured outstanding remarks from tech geniuses all over the world because of its fascinating camera with exciting apps, brilliant colored screen, and power of touch.

Huawei has been operational in Pakistan for quite some time now. The exceptional quality products and devices etc, this company has been delivering have played an important in raising the technology market standards of the country. Huawei has also been actively involved in engaging with its consumers on the ground level. They have not only promoted their products but also actively aided the youth by providing them with international exposure, through abroad educational tours and job opportunities. Now, Huawei has taken this praise worthy initiative, “My Huawei My Pakistan” campaign, so that a friendly, loveable and positive face of Pakistan is shown to the world.