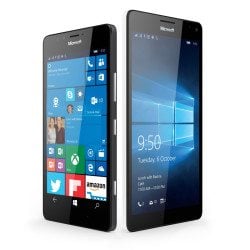 and the first to ship with Windows 10, will deliver a familiar and consistent experience that extends across your Windows devices, including innovative features like Windows Hello beta for Lumia and Continuum for phones. Combined with stunning HD displays, new PureView cameras with 20-megapixel sensors and triple LED natural flash that shoots 4K video, as well as the latest in processing power, Lumia 950 and Lumia 950 XL represent the best innovation from Microsoft. Customers in Pakistan can now buy the Lumia 950 Dual Sim and Lumia 950 XL Dual Sim starting at approximately 65,000 PKR and 75,000 PKR respectively.

With full Windows 10 and features like Continuum for phone, it’s easy to do more than ever from your phone whether you’re in the office, at home or on the road.” Speaking on Lumia 550 he said “Lumia 550 is a cost friendly 4G enabled phone which is a welcome addition to our affordable smartphone portfolio running the latest Windows 10 operating system, with front and rear cameras, great apps, and Microsoft Office and Skype built-in, the Lumia 550 is a well-rounded package at an appealing price of approximately 13500/- PKR

 Lumia 950 DS and Lumia 950 XL-DS are the first Lumia phones to come preloaded with Windows 10 – delivering on our promise of one familiar and consistent the experience that transitions seamlessly across Windows devices from key apps like Office built-in to access to all your important data in OneDrive and the cloud.

 Both Lumia 950 DS and Lumia 950 XL-DS feature Continuum for phones, enhanced by the optional Microsoft Display Dock accessory. This Windows 10 feature allows people to use their phone like a PC by connecting it to a monitor and transforming it for larger-screen entertainment, r adding a keyboard and mouse to work like a PC with Windows 10 apps like Microsoft Office, while simultaneously taking calls or performing other tasks1.

 As the latest premium handsets, these phones boast superior performance. Both devices feature a QuadHD AMOLED display featuring up to 564ppi, which means photos, videos and even simple reading show up well, even in sunlight.

 And Microsoft’s PureView technology is built into both Lumia 950 DS and Lumia 950 XL-DS cameras, boasting a 20MP sensor and triple LED natural flash. The camera 1 Sold separately. captures the perfect image, even in the most challenging conditions, and those photos can be automatically synced across all Windows 10 devices with the Windows Photo app and shared easily with friends and family.

 To make this all possible, both phones also have the latest-generation Qualcomm® Snapdragon™ processors to get these things done faster.