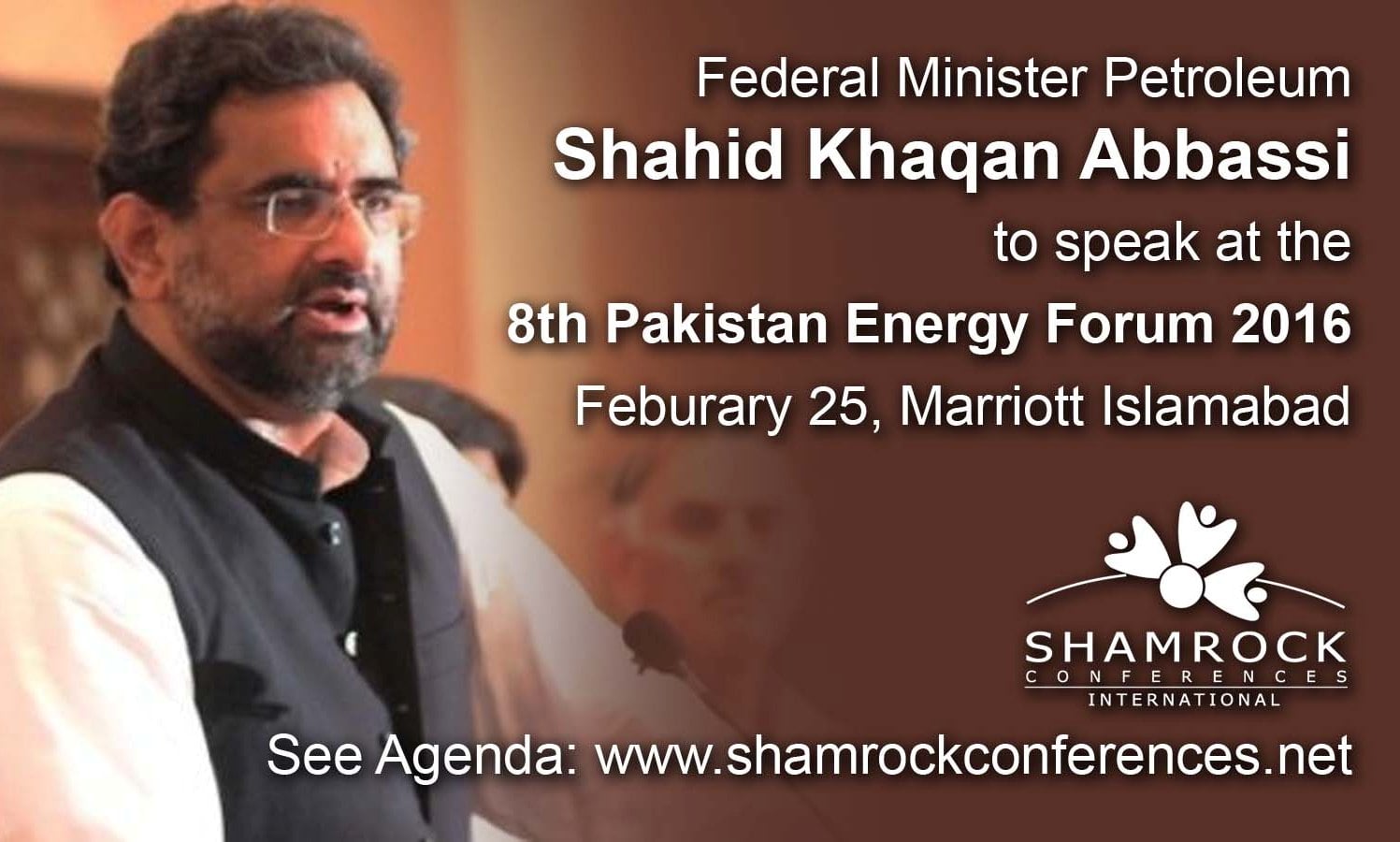 Federal Minister for Petroleum and Natural Resources, Shahid Khaqan Abbasi, will be delivering the keynote address at the forthcoming 8TH Pakistan Energy Forum 2016 being organized by SHAMROCK Conferences International (www.shamrockconferences.net) on Feb 25, 2016, at the Marriott Hotel, Islamabad.

Being organized for the eighth consecutive time, the conference has made a mark as one of the premier events in the federal capital focusing on the challenges of the energy sector.

Menin Rodrigues, Chairman of SHAMROCK Conferences International and the Convener of the conference said, “Our objective is to bring together all key stake holders to address the critical aspects of the energy issues in Pakistan so that the debate can convert into favorable outcomes. In the current circumstances and with many mega projects in the offing, it won’t be long before our country achieves self-sufficiency, our production lines become operative and our people have access to affordable electricity.”

A consultative group comprising of eminent practitioners from the energy sector has envisaged focus on an integrated approach and private sector investment from China to spur economic uplift in the country, as Pakistan embarks on an ambitious energy infrastructure worth billions of dollars of investment from Chinese companies.

Dr. Gulfaraz Ahmed, former Secretary Petroleum says, “CPEC brings US$46 Billion investment into Pakistan’s energy and infrastructure sectors promising a historical opportunity of economic uplift, whereas TAPI is a landmark energy project that on completion will reduce gas supply gap and serve as a win-win project for all the countries.”

Another former secretary Mr. M. Abdullah Yusuf noted, “Pakistan being the sixth largest populous country in the world demands higher energy inputs, therefore, all eyes are set towards the forthcoming private sector investment from China particularly, which would certainly address the basic issues.”

Chairman of Hascol Group, Mr. Mumtaz Hasan Khan, was of the view, “Pakistan is blessed with abundant natural resources like gas, coal, solar and wind power and as such an integrated approach would help to maximize our indigenous resource so as to reduce foreign exchange expenditures and also provide job opportunities.”

The annual conclave of key stakeholders is expected to attract several investor groups from countries who have desired to assist Pakistan with its pressing energy needs. The concerned ministries, regulatory bodies, exploration, and production sector, power producing and distribution companies, oil marketing companies and organizations engaged in renewable resources, solar, wind and coal will also be featured at the forum.

Minister of State for IT and Telecom Mrs. Anusha Rehman