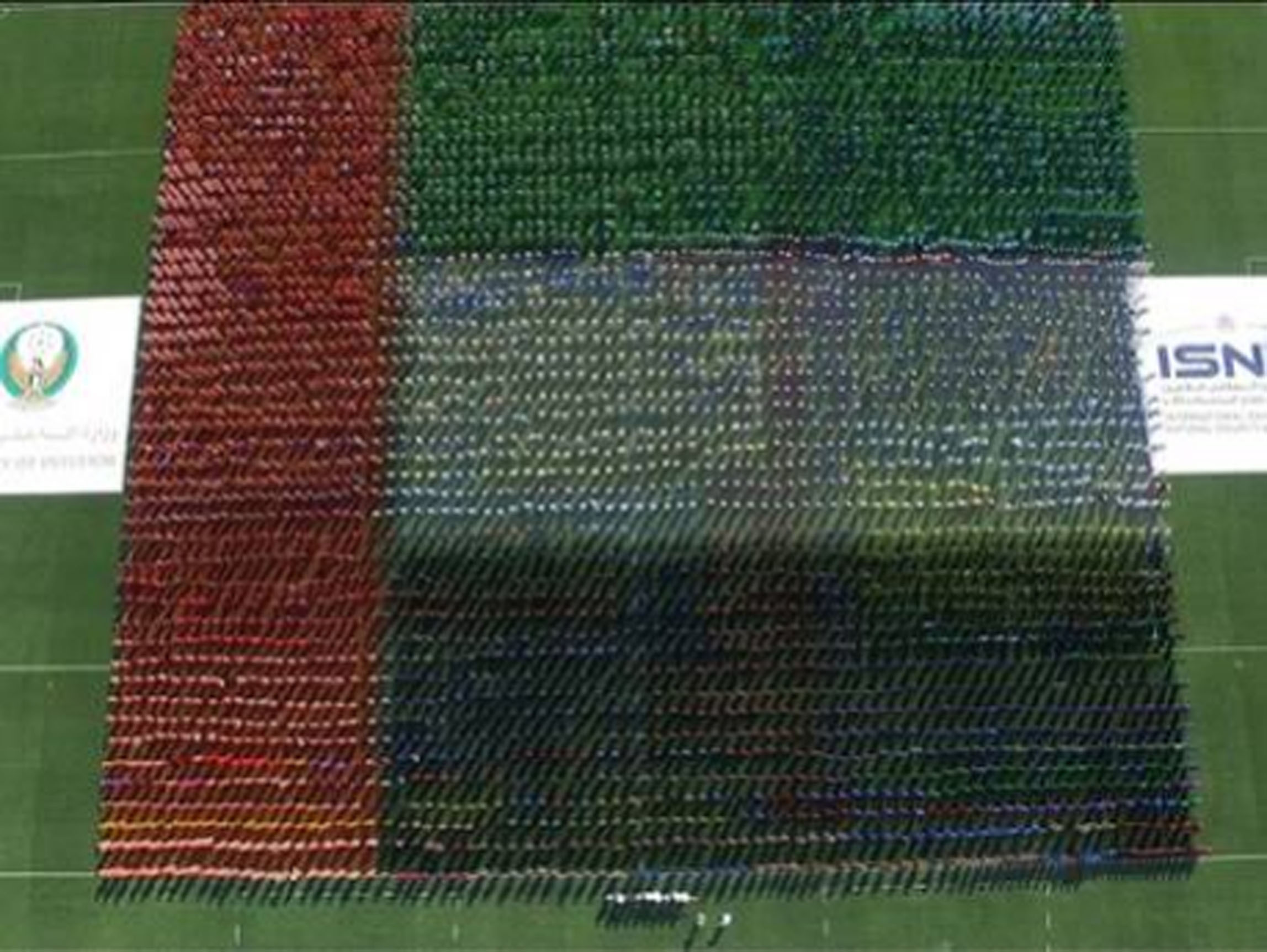 Major General Ahmed Nasser Al Raisi, Inspector General of the Ministry of Interior, Deputy Chairman of the Higher Organising Committee of International Exhibition for National Security and Resilience (ISNR 2016), witnessed on Sunday morning the breaking of the World Guinness record when the biggest ever UAE flag was formed by 3,929 persons.

They were wearing the safety helmets to form a magnificent mosaic picture of the UAE flag in the Al Shamkha area of Abu Dhabi.

While receiving the certificate from Guinness World Records, Al Raisi stressed that drawing the biggest flag of the UAE by means of human gathering wearing the safety helmets, “represents an image of loyalty and belonging to the nation and the leadership. It is a picture that signifies a human message reflecting the keenness of the Ministry of Interior (MoI) to maintain the security and safety of the society.”

He noted that setting a new World Guinness Record shows the lasting desire in citizens and residents to ensure the establishment of policies based on the highest international standards in the field of occupational health and safety in the state.

Al Raisi added that in light of the development in various fields witnessed by the country, “the commitment of the government and the youth will continue to support the pivotal leading role of the UAE in the field of occupational health and safety.”

He lauded the efforts of all those who contributed to the success of the largest human gathering wearing safety helmets in setting a new world record in the Guinness World Records. The record-breaking is held in conjunction with ISNR 2016, which is organised by the MoI in cooperation with Reed Exhibitions.

The MoI organised the event of setting a new world record for the biggest flag of the country formed from human gathering wearing safety helmets in collaboration with the Abu Dhabi Occupational Safety and Health Center (OSHAD), with the participation of 3,929 male and female MoI staff members (from Abu Dhabi Police College, Police School Departments in Abu Dhabi, Dubai Police Academy, the Federal Police School in Sharjah) as well as huge numbers of citizens and residents.

The event was also attended by Brigadier Jassem Mansour Al Mansouri, Deputy Inspector General of the Ministry of Interior and Chairman of the Secretariat Committee of the ISNR 2016, a large number of officers, and officials and referees from Guinness World Records.

The International Exhibition for National Security and Resilience (ISNR) is the region’s foremost platform dedicated to homeland security, safety and national resilience which takes place every two years in ADNEC, Abu Dhabi, organized by the UAE Ministry of Interior and Reed Exhibitions.

ISNR Abu Dhabi in its 7th edition from 15-17 March 2016 is expecting 500 exhibiting companies from 45 countries spreading over 27000sqm, in addition to 18,000 local and regional experts and decision makers from the private and public sectors and over 150 regional and international government buyers and delegation members.

2016 will witness the largest and most comprehensive edition ever held; ISNR will include three specialised sections for Homeland Security and National Resilience, Information Security, and Critical Infrastructure Security – together with two co-located events dedicated to Fire and Emergency Middle East and Occupational Safety and Health Middle East co-organised by OSHAD Abu Dhabi; ISNR will feature, as well, the International Conference on Security Challenges, Cyber Crime Conference and Occupational Safety and Health Conference in addition to specialised workshops and a world-class life.