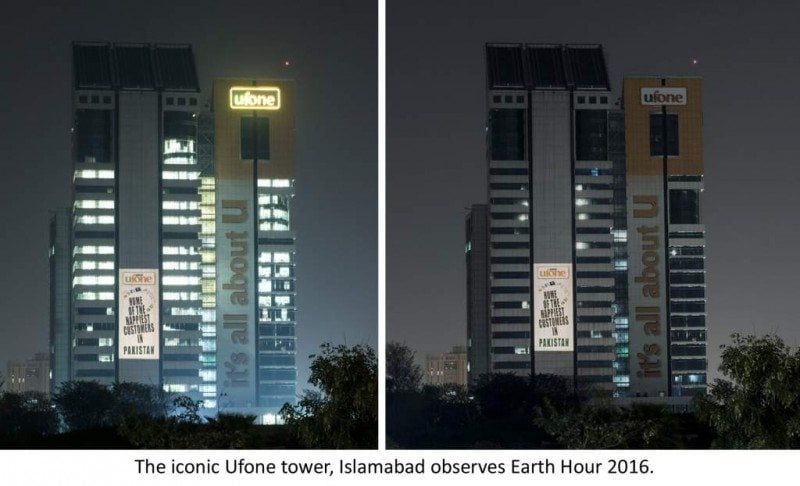 Ufone has pledged to support Earth Hour 2016 in association with WWF Pakistan as part of its persistent quest for corporate social responsibility and environmental sustainability.

Ufone as part of its energy efficient belief has observed the Earth Hour today from 8:30 PM to 9:30 PM by switching off redundant lights and electrical appliances that lead to extra energy consumption. In doing so, it has urged its consumers to follow suit. WWF’s Earth Hour is a people’s movement that has gained momentum over the years as it engages all stakeholders of the globe to turn off non-essential lights for an hour. It was notably started in Sydney, Australia on March 31, 2007, when more than 2.2 individuals and 2,000 businesses switched their lights off for an hour, this later spread across countries.

The movement has inspired individuals from more than 7000 cities across the world to voice their concerns about climate change and accordingly channelize efforts for the cause, thereby making it the largest voluntary movement witnessed in history.

“The world is changing at a fast pace and demands our attention as far as environmental sustainability is concerned. It’s about time we took our planet seriously and pooled in individual efforts for a greater cause,” said Mr. Amir Pasha, Head of PR and CSR, Ufone, “Earth Hour is not merely about saving energy for an hour alone but should rather come as a realisation for thinking beyond ourselves and more towards environmental sustainability that would benefit the world at a larger scale. As part of our corporate social responsibility strategy, we deem it our priority to contribute towards this cause and have therefore associated ourselves with WWF to show solidarity at the corporate level.”

In 2015, Earth Hour magnified at a level to become the world’s largest grassroots movement for the environment the impact of which is being observed in communities combating climate change on a daily level.