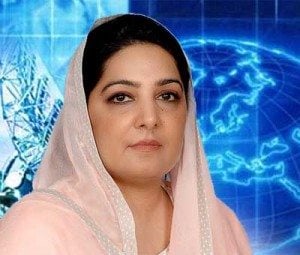 Minister for Information Technology, Anusha Rahman on Tuesday said the introduction of mobile broadband has contributed a lot in connecting people and increased internet penetration in the country from mere 3 percent to 18 percent in a short period. Availability of these technologies has resulted in the speedy proliferation of broadband access both in urban and rural communities with a record achievement of more than 30 million subscribers in less than 2 years.
She was addressing a ceremony held here in connection with World Telecommunication and Information Society Day which was also attended Minister for Finance, Ishaq Dar as chief guest, Minister of State Health Services, Saira Afzal Tarar, Legislators, Secretary IT,
Chairman Pakistan Telecommunication Authority (PTA), Dr. Syed Ismail Shah, Chief Executive Officers (CEOs) and senior staff of Mobile Phone Operators, industry’s experts, government officials, media-persons and students and teachers of ICT for Girls program.
The World Telecommunication and Information Society (WTIS) Day is celebrated worldwide on May 17 every year to mark the creation of International Telecommunication Union (ITU). The theme this year is `ICT Entrepreneurship for Social Impact.’ She said the auction of spectrum fetched US$ 1.2 billion for national exchequer. In addition, around US$ 1.3 billion worth of
investments are being made in rolling out of 3G/4G networks and infrastructure.
The Minister said recently approved telecommunication policy has envisioned the transformation of Pakistan into digital economy and added auctioning of the further spectrum to meet market demand and induce better quality of service is expected in June this year. The Minister said the government has also introduced an incentive package for mobile phone manufacturers in the country to support the uptake of usage of ICT application and services.
She said present regime under the able leadership of Prime Minister Muhammad Nawaz Sharif has devised clear-cut programmes to translate telecom development into measurable socio-economic benefits of nation and added in this direction a strategy is being pursued to achieve development targets including projected figure of additional employment creation while targeting 36 per cent broadband penetration in next two years.
Regarding IT exports and services, she said these have increased by 41 percent since 2013 by just reorganizing the processes. Pakistan is now at number four in the world when it
comes to freelancing. This achievement is very encouraging which remained unknown to most in the public domain. She said prospective young and energetic IT professionals
would soon be under the umbrella of National Incubation Centre of the Ministry. These start-ups with potential to become IT giants will be given full facilitation including premises, mentorship, and opportunities to reach out local and international markets.
The center will be managed by a private partner. Every year 40 startups will be hosted in the center with each startup comprising of 5-10 member team.
The Minister further elaborated the government is providing billion of rupees to install infrastructure in both in under-served and un-served areas of Pakistan as “We are trying its best to connect more people through easy and affordable access to the Internet.”
She said the focus areas are accelerated deployment of e-services and to develop applications and content to enable socio-economic development through digitalization of traditional sectors
and also leveraging e-government to make Pakistan front-runner in good governance through IT enablement at all levels.
Anusha Rahman assured that her Ministry is focusing on ensuring that the Cellular Mobile Operators (CMOs), secured next generation licenses, have a conducive and supportive regulatory and policy Framework going forward to focus on providing solution to the
masses rather than focusing on resolution of sector problems.
With regard to ICT for Girls Initiative, she said it is quite important and vital that women segment who constitutes 50 per cent of country’s population, should come forward, show their potential and contribute in socio-economic development.
The Minister said ICTs for young girls system has been launched with joint effort of Pakistan Baitul Maal (PBM),
Universal Service Fund (USF) and Microsoft to help prepare many young girls from underestimated area of society, with a goal that they can get suitable occupations.
The Minister emphasized in this age of innovation and technological advancement, steps need to be taken that benefits of ICT reach girls and women.
She said her government was focusing on this particular areas and ensuring implementation following party’s manifesto.
She advised that the women segment should not restrict themselves for typing only rather they should take advantage of and focus on learning different IT and computer courses as
Information Technology has assumed a pivotal role in every sphere of life. This phenomenon will also lead to women empowerment, she continued.
The other initiative is setting up of Software Technology Park in Islamabad. Parks at Lahore and Karachi will also be set up.
She said her Ministry is in process of developing tech city in Federal Capital as well.
Chairman PTA said for the consumers, availability of high-speed mobile broadband services in both urban and rural areas is encouraging more connected community and promote e-commerce
related activities. He said next generation mobile services are considered an enabler towards GDP growth and help introduce more innovative e-services.
In his brief remarks, Managing Director, PBM, Barrister Abid Waheed Sheikh said it is our duty to impart IT education to girls in order to enable them to earn their livelihood and contribute in
national development.
He said thousands of girls are being imparted training in ICT related areas in the first phase of the program.
Country Head of Microsoft, Nadeem Malik expressed commitment of his organization in promoting ICT and hoped this particular initiative would help materialize government’s vision to make Pakistan a digital country.
Head of Mobilink, appreciated efforts and role of present government regarding IT and telecom services in the country.
Later, Anusha Rahman distributed certificates amongst students and teachers of ICT Girls program.