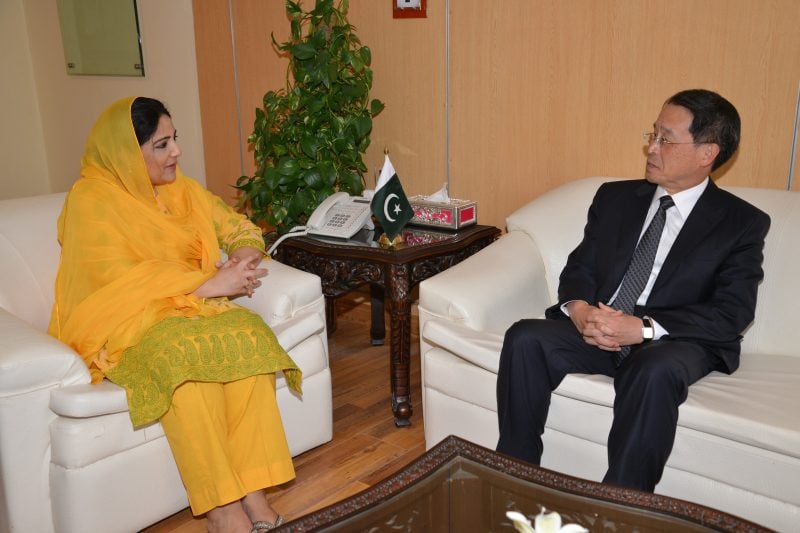 The Ambassador of Japan to Pakistan Mr. Takashi Kurai, called on the Minister of State for Information Technology Mrs. Anusha Rahman here in her office today. Federal Secretary IT Mr. Rizwan Bashir Khan was also present in the meeting. Matters of mutual interest, promotion of bi-lateral relations and cooperation in IT and Telecom sector between the two countries were discussed in the meeting.

The Minister apprised the Ambassador regarding key initiatives being taken by Ministry of IT for the development of IT & Telecom sector of Pakistan. Anusha Rehman said that Pakistan is a country of almost 200 million people with 60% population below the age of 30 years. Therefore, capacity building of our young entrepreneurs is on our priority agenda. We are establishing a “National Incubation Centre” with Mobilink in Islamabad. Initially 50 startups will be selected and mentored in this incubation centre on yearly basis. Subsequently two more incubation centres would also be established at Lahore & Karachi respectively.

She said that advent of 3G/4G we not only witnessed phenomenal increase in the number of customers but also seen exponential growth in broadband penetration which now stands at more than 30 million users representing a growth to over 18% today which was less than three percent in 2013. She also highlighted that Government of Pakistan is taking all steps to take the ratio to be more than 35% within next two years.

Anusha Rehman said that we are working on the vision of “Accelerated Digitization” in the country. Therefore we are connecting the underserved and un serverd areas of Pakistan through USF on one hand while encouraging the competition in the market on other hand so that both targets of accessibility and affordability could be achieved at the same time. She further said that it’s an appropriate time that Japanese telecom companies may come to Pakistan and invest in business, local manufacturing or other telecom endeavors of this immensely thriving sector and get benefits of special incentives being offered to the investors by the government.

The Minister re-iterated that Cyber Crime has become a matter of global concern now and a collective effort is required to protect the cyber space, because cyber crime is a crime which does not exist within the boundaries of a nation. Therefore, universal cooperation among nations is direly needed to address the emerging enhanced requirement of Cyber Security. She further said that we are in the process of enacting a legislation on Cyber Crimes which will also ensure that internet users have same legal rights online as they have offline. Moreover, all the sections of this proposed law have been prescribed as non-cognizable except terrorism & child pornography.

The Japanese Ambassador, while appreciating the forward looking steps being taken by the government of Pakistan and Ministry of IT for the development of IT& Telecom sector, assured their cooperation for enhancing bilateral engagement in IT & Telecom spheres, between the two countries.