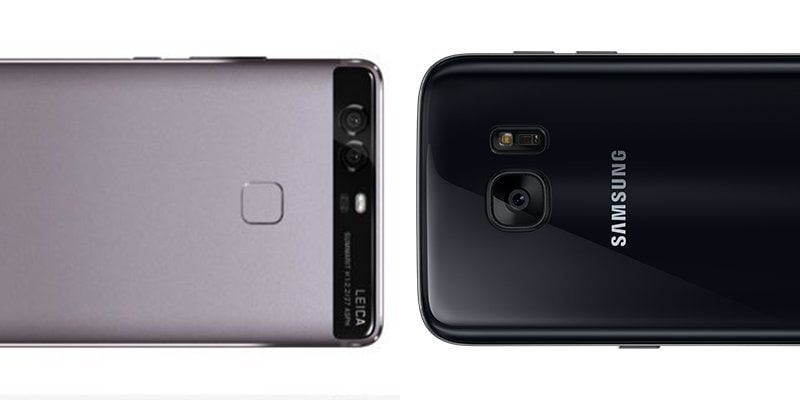 It seems once again Huawei left the so-called leading technology brand way behind in terms of smartphone manufacturing. As evident,  After a number of marketing efforts and unchecked spendings on campaigns on the ground work for Galaxy S7 and later S7 edge plus launch, Samsung could not work itself out the way it was expected by the consumer market. The so-called signature models have nothing new or exciting in the market, also it could not bring new looks to the first hand. It seems that Samsung has turned to a too big technology manufacturer to have a new idea and innovative approach in its products. Simply, why should one buy Samsung Galaxy S7 or S7 Edge when one already has even better options, like Huawei P9 & P9 Plus, with dual camera and way better features.

Huawei P9 & P9 Plus are the true flagship smart devices that have ultimate high technology features. In the first place, Huawei P9 & P9 Plus have a completely new look, making them distinct from other smartphone models of Huawei. However, Samsung Galaxy S7 and the Edge, in first, leaves you confused if these are the new models or it is Galaxy S6 with minute variations. This is true, to an extent, that may be the S7/Edge user has to tell everyone that it is Galaxy S7 or S7 Edge. On the contrary, Huawei P9 & P9 Plus are the sleeker, more charming and bezel-less design that not only implies a new handset beauty, but it is actually different to be noticed by the people.

When it comes to a perfect display, Huawei P9 & P9 Plus again beat the Galaxy S7 and the S7 edge. The Samsung Galaxy S7 has only 5.1 inches large display screen that is too small as compared to the 5.2 & 6 inches larger screens of Huawei P9 & P9 Plus respectively. Moreover, P9 & P9 Plus offer the best combinations of a Full HD display with 367 pixels per inch. Samsung fails to identify the display qualities as well, and it offers the customers with Quad HD display with a larger 577 ppi. It may sound like “ok” as if Samsung is offering 577 ppi with Quad HD, but, in fact, it is not “OK” for the technology lovers. The human eye is not able to recognize above 300 ppi rather it feels the better experience of 577 ppi in Samsung S7 model. This makes Samsung S7 a strange product to not serve the Human customers, at least.

Samsung has not even valued the stronger battery needs of the customers, especially in Pakistan where power issues make the large capacity battery a necessity. S7 has a 3000 mAh while Huawei P9 & P9 Plus offers a stronger battery with 4000 mAh. Huawei P9 & P9 Plus also supports the feature of ultra speed charging and it serves the purpose of longer hour battery. Furthermore, Huawei P9 & P9 Plus has kirin chipset that is smart enough to run with optimum power consumption and produces best results with efficiency. While the chipset of S7 uses the extra battery and ultimately make the battery to drain earlier. Overall, S7 users must carry an external battery source with them to keep S7 alive. Simply, what to do with a smartphone when you have unsatisfactory battery performance/capacity.

Huawei P9 & P9 Plus has 12 MP dual rear camera with unmatched features and applications for professional photography. Samsung S7, however, offers only a 12 MP camera and one can easily assume where it is going for Samsung S7 with low camera specs. Similar efficiency issues are with the fingerprint scanner as well. Galaxy S7 has a poor and actually old scanner, that again nullifies the claim of all new smartphone. In the market, Huawei Mate8 is the best smartphone with ultra modern features and ultimate technology. The fingerprint scanner of Huawei P9 & P9 Plus is way better and highly efficient, indeed, and it has satisfied the customers best.

Although, S7 is offering 32GB and 64 GB memory with an external memory card slot with a lower capacity as compared to Huawei P9 & P9 Plus but clearly something went wrong with Galaxy S7 to be all “new” smartphone. It is strongly expected that Samsung Galaxy S7 is going to experience worst market response with such a low-quality features. In fact, Samsung authorities were right on the tough smartphone market predictions, but they have failed to recognize that they are outdated in the approach of manufacturing a better smartphone model.

Huawei Band is A Perfect Companion & A Fitness Unit