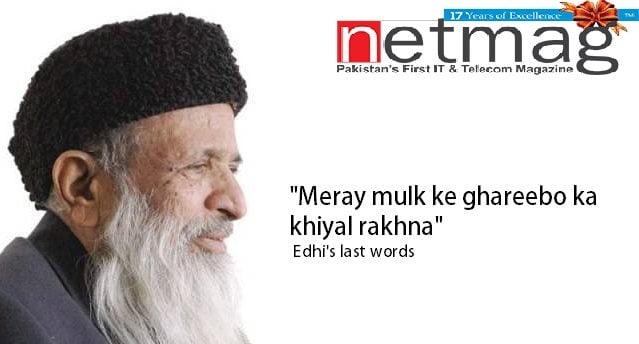 “Empty words and long praises do not impress God. Show Him
your faith by your deeds.”
­Abdul Sattar Edhi
Philanthropist,humanitarian,Pakistan’s most ‘respected’ and ‘legendary’ figure,revered
by many as a national hero,Sir Abdul Sattar Edhi passed away at the age of 92 in
Karachi on Friday.Since Friday,he had been on the ventilator for over six hours and
after consulting doctors, the family allowed to remove the ventilator. Edhi Sahab suffered
from a number of diseases ,including diabetes, hypertension, and kidney failure. His son
told reporters earlier today that he had also become very weak physically because of
not being able to eat for some time.The well known,respected,looked upon to
humanitarian, founder and chairman of the Edhi Foundation, was diagnosed with kidney
failure three years ago but was since unable to receive a transplant due to his poor
health .Edhi Sahab’s son Faisal Edhi said as per his father’s last wish,he will be buried in
Edhi village,in his regular clothes,and said that he had prepared for himself a grave in
Edhi village about 25 years ago.He moved to Pakistan in 1947,when he was just 20
years old,and has been giving his all to Pakistan since then,and even before going ,he
donated his eyes,the only organ of his body which could be donated,due to his poor
health.
Starting from humble beginnings, he was known to stay true to his roots and focus all
his energy on his humanitarian work.He not only cared and made efforts for human
beings but also animals,showing the love he has in his heart and the reason he was
known as the “angel of mercy”.He did not do the social work to earn popularity,for
competition,or to be given a high post,but only to eradicate poverty,and thought of it as
his duty in this world.He would get donation’s in huge amounts every single day,yet all
his life he lived with only two clothes and a pair of shoes.Edhi Sahab never spent the
money for his own luxuries,even though he could buy whatever he wished for,he could
have a had a big house,servants to serve him,cars and what not.Yet he slept in a
windowless room of white tiles adjoining the office of his charitable foundation. Sparsely
equipped, it had just one bed, a sink and a hotplate,lived all his life with just two clothes
and a pair of shoes,living his life according to the Prophet’s (SAW) sunnah,earning the
massive respect he has now.
“So, many years later there were many who still complained and
questioned, ‘Why must you pick up Christians and Hindus in your
ambulance?’ And I was saying, ‘Because the ambulance is more
Muslim than you’.” (Abdul Sattar Edhi)
Edhi resolved to dedicate his life to aiding the poor,he established a welfare trust,
named the Edhi Trust with an initial sum of a five thousand rupees which was later
renamed as Bilqis Edhi Trust.The Edhi Foundation, founded by Edhi, runs the world’s
largest ambulance service (operating 1,500 of them) and offers 24­hour emergency
services. It also operates free nursing homes, orphanages, clinics, women’s shelters,
and rehab centres for drug addicts and mentally ill individuals. It has run relief
operations in Africa,Middle East,eastern Europe and United States where it provided aid
following Hurricane Katrina In 2005..The Edhi Foundation has rescued over 20,000
abandoned infants, rehabilitated over 50,000 orphans and has trained over 40,000
nurses. It also runs more than 330 welfare centres in rural and urban Pakistan which
operate as food kitchens, rehabilitation homes, shelters for abandoned women and
children and clinics for the mentally handicapped.His son Faisal Edhi, wife Bilquis Edhi
and daughters managed the daily operations of the organization during his ill health and
will continue to do so In Sha Allah
The humanitarian has received numerous awards both Internationally and nationally,the
prominent ones being
(NATIONALLY)
● Human Rights Award by Pakistan Human Rights Society
● The Social Worker of Sub­Continent by Government of Sindh (1989)
● Shield of Honor by Pakistan Army
● Nishan­e­Imtiaz, civil decoration from the Government Of Pakistan(1989)
● Moiz ur rehman Award (2015)
●
(INTERNATIONALLY)
● Lenin Peace Prize(1988)
● Peace and Harmony Award (2001), Delhi
● Peace Award (2004), Mumbai
● Peace Award (2005), Hyderabad Deccan
● Ahmadiyya Muslim Peace Prize (2010)
● Nobel Peace Prize 2016 (Nominated)
Pakistan has lost it’s guardian angel,no words are enough to describe this loss.The
whole nation is deeply saddened and in grief,may Allah give patience to bear the loss to Edhi sahab’s
family,loved ones and pakistan. For if someone deserves to be called as the ‘father of
nation’ after the great Quaid. It is Sir Abdul Sattar Edhi. You will forever remain with us,in
our hearts.