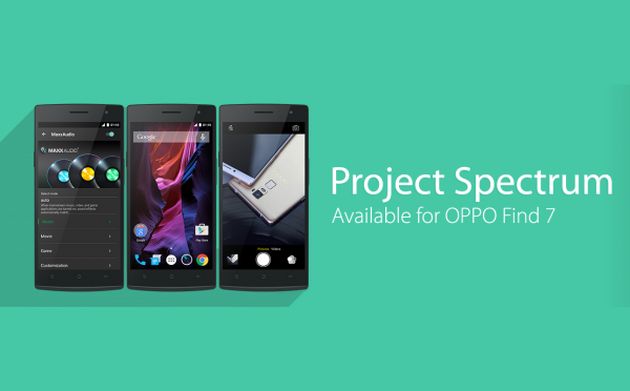 OPPO, the chinese manufacturer is known for it’s attractive and distinctive phones,with
solid build quality and high level camera quality.One thing OPPO has always been
criticized is its software. Almost all of OPPO’s smartphones are running the out­dated
version of android,while all it’s other counterparts have already switched towards
Android Marshmallow,and soon enough will be recieving Android Noughat in the coming
two months.
To pump up its game, OPPO announced last year Project Spectrum,with the aim to
bring the android software into the news SmartPhones being manufactured by
OPPO.They will also be borrowing some features from ColorOs including screen
gestures, camera and Maxaudio.
OPPO recently announced that the flagship F1 selfie expert and R7 Plus can now be
upgraded to Project Spectrum based on Android Marshmallow.Project spectrum is also
available for discontinued models including R5 and Find 7/7a .
To Upgrade to Android Marshmallow,you need to follow the following steps.
● Download the package for your phone
● Put the download package to the root directory of your phone.
● Turn off the phone.
● Hold down Power key + Volume down key at the same time.
● When OPPO logo appears release your fingers, after a few seconds you’ll enter
recovery mode.
● Select language and use Volume up / down to scroll and power key to select.
● To make a clean install please select “Wipe data and cache”, press “Yes” when
it’s done.
● Then select the downloaded firmware and press “Yes” to start update.
● Reboot when the upgrade is complete
While upgrading if you receive an error reboot into recovery again and then upgrade. But before upgrading you need to backup all of your data.