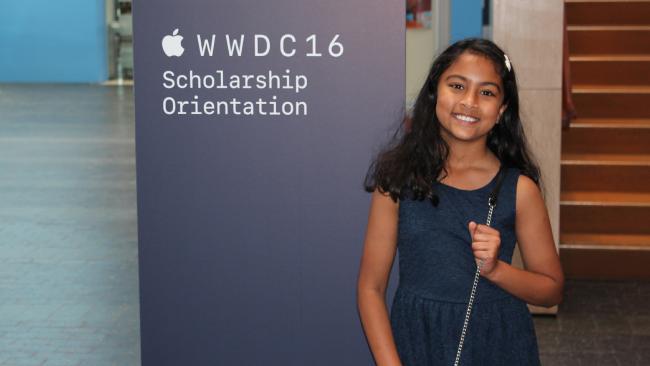 Anvitha Vijay is a nine-year old girl from Australia who contributed at the Worldwide Developer’s Conference 2016 and became the youngest app designer.

She made an app for the iPhone/iPad named as Smartkins Animals. It is an app related the classification of animals and interaction animals with each other, and it won the scholarship for her to join the Apple WWDC 2016 in San Francisco. She also got opportunity to meet Apple CEO, Tim Cook. He stated Vijay as the youngest app developer ever at the conference.

While expressing her views in an conference, Anvitha Vijay showed her excitement of meeting with the Apple CEO and her dream of joining the conference becoming true. She later added that she is just a beginner in the field of coding, there are many other things to learn. Anvitha started coding when she was just seven years old while watching the YouTube moral videos; she came with the idea of designing an app for her younger sister to support her easily classify the animals. According to her, the only hurdle in getting iTunes account was her young age, so she used her mother’s iPhone to log into iTunes.

When someone raised the question that what does she want to become when she grows up? She said that she wants to change people’s lifestyles by the help of technology and innovation and want to design things which can facilitate people and informative for the people.