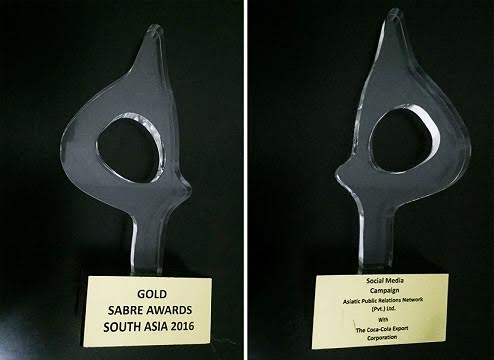 A Pakistani company Asiatic Public Relations Network has been declared as the winner of the category Social Media Campaign, of the 2016. The prestigious SABRE Award for Excellence in Public Relations Programming attract close to 5,000 entries globally each year and provide the premier showcase for the best that public relations has to offer.

APR has won the Award for its entry: The Coca-Cola Book Bank, a unique PR activity conceived and executed by the agency for its client, Coca-Cola Pakistan, and which targeted collecting donation of textbooks from the public, to be given over to students of schools operated by The Citizens Foundation (TCF) and other NGOs for less privileged children. The campaign was actively promoted on the social media and had received an overwhelming response.

“We are happy, honored and humbled on receiving this award, which is an independent third-party endorsement of our creativity and capabilities, and which is a victory not only for APR but for the PR industry of Pakistan,” stated Zohare Ali Shariff, the CEO of Asiatic Public Relations Network, and added “As a pioneer of PR in the country, APR is happy to note that this discipline has taken strong roots and is poised for sustained growth, as more and more organizations realize the critical role of PR in generating awareness, credibility and goodwill with stakeholders”

The annual SABRE Awards are given out by the Holmes Group, which is headquartered in USA. The Group is dedicated to proving and improving the value of public relations, by providing insight, knowledge and recognition to public relations professionals.