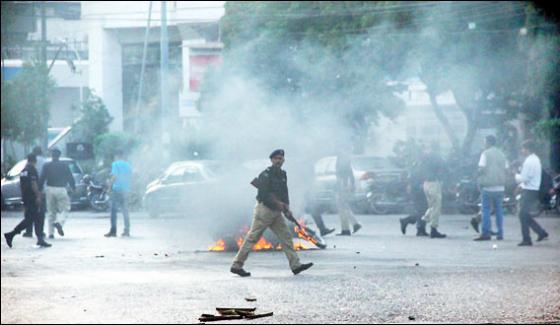 This all started after the telephonic conference of Altaf Hussain, Chairman MQM, with his party members at hunger strike in which he addressed the members to attack specific media news channels including SAMAA, ARY and GEO News. Just After the address, Members full of enthusiasm started marching towards ARY news sadar office and Attacked every media Personnel who came in their way.

One thing to mention here is that there were not only male workers but also female MQM party workers who entered into media houses. All the members were armed and also they snatched the weapons from security officers that were present in the office.

The anger and violence was the result of not giving proper coverage to the Hunger Strike by MQM members. Local police tried to disarm the uprising but was unable to do so because the MQM members were Large in Numbers and secondly they were absolutely violent. Several of Policemen were injured and one man got killed.

Netmag being a part of Media Family strongly condemns the attack on media houses and stands firm with all the media partners. We also hope that our democracy will support the freedom of speech and will arrest all the culprits who were involved.

Google to Help Fiber Optics With a Wireless Replacement

PlayStation 4 Slim Model Is Out Now