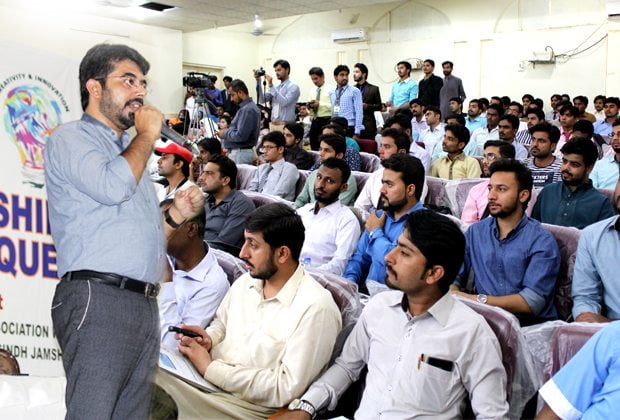 TECH Pakistan visited Sindh University, Jamshoro and held an exceptionally informative session for students on ‘Entrepreneurship’ to discussabout self-driven concept that could be used for creatingsuccessful startups and implement entrepreneurial ideasin the most affordable way.

The conference took place at the main auditorium, Sindh University, Jamshoro. A crowd of over 200 including students, teachers, professors and university’s dean participated in the auspicious event.

The Chairman of TECH Pakistan, Mr. Kanwal Masroor and Mehwish Abdul Sattar – Managing Director of Digital & Technical Marketing (DTM) were among the speakers who shared their phenomenal experiences and views on entrepreneurship.

While discussing about life experience, Mr. Kanwal Masroor told the much adorned audience about how a 12-year kid, who used to work in a textile industry spinning thread, became the owner of two big companies – a software house and another a technology association.

He continued by stressing on the fact that people nowadays do not want to take chances but stick to their routine work. He said that one has to explore in order to learn more and experiment in order to know about the success or failure.

Mr. Masroor also gave impressive ideas on how to start up a work, free from conventional ways and limited resources.

On the other hand, Mehwish Abdul Sattar’s speech was a phenomenal focus on women entrepreneurship, on how they can face social and work issues to become the limelight of any place. She did this by telling her own story, in which a girl of eight years who lost her father, faced societal issues and financial pressures but maintained her position and learned things to develop into an independent and strong woman.

Some outstanding feedback was received by the audience as they applauded, cheered and clapped on the speakers’ talk. Others went far questioning and responding with favorable answers which revealed their enthusiasm in the topic. Question / Answer part marked the end of the session.

Lastly, the Vice Chancellor of Sindh Universitymet with Team TECH and gave them applauding remarks along with Shields and Ajrak as gifts, a great gesture it was.