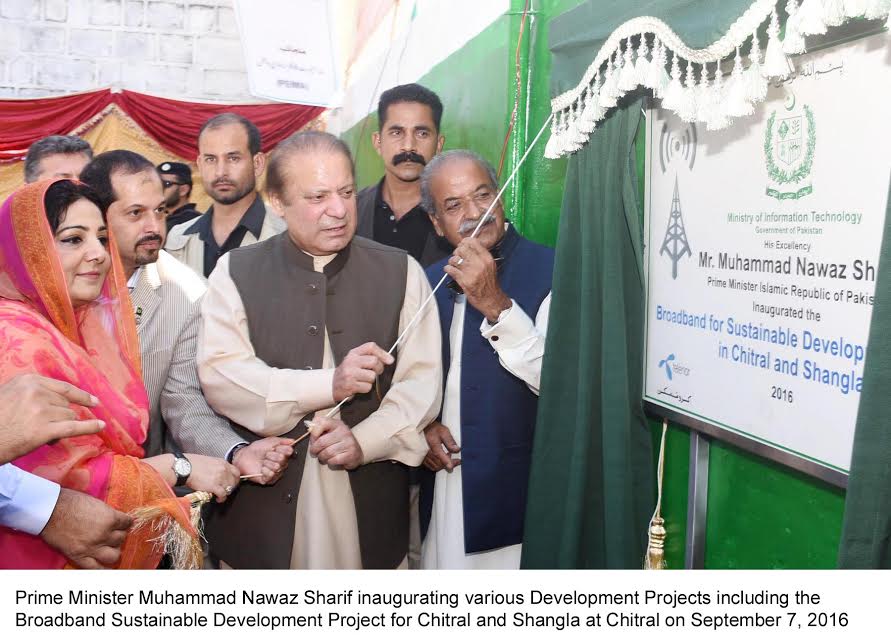 Minister of State for Information Technology Anusha Rehman said that project for the provision of
Information Communication Technology (ICT) services to the people of Shangla and Chitral will surely change the fate of the people of these areas.
The project was inaugurated by Prime Minister Muhammad Nawaz Sharif on Wednesday.
She further said that communications, both road and telecommunication have immense potential of changing the destiny of our country and its citizens through better economic opportunity and potential for business and employment, says a press release.
Exactly due to these reasons, next generation connectivity for both the rural and urban areas of Pakistan to digital ICT highways is embedded in manifesto of Pakistan Muslim League(N).
The launching of a comprehensive program of providing telecoms and broadband coverage to the residents of even the most remote parts of Chitral as well as Shangla is not less than a blessing, she added.
The minister said today’s inauguration  of Chitral and Shangla telecommunications coverage project by the Prime minister is yet another milestone towards digital development and fulfillment of long standing demand of these areas and accomplishment of our commitment to the people of these areas for connectivity, infrastructure development and provisioning of ICT services even in the most remote areas of Pakistan.
These projects under “Broadband for Sustainable Development Program” will provide voice/mobile broadband internet services to around two million inhabitants spanning over 1,137 unserved mauzas
of Districts Shangla, Swat, Buner, Chitral, Upper and Lower Dir.
The federal government is providing subsidy of almost Rs 3.85 billion for these projects.
She said in this spirit of our manifesto and commitment to the Pakistani nation, Ministry of IT and Telecommunications, through a viable and thriving Public Private Partnership mechanism under the
Universal Service Fund, has provided subsidy of over 35 billion rupees in various infrastructure projects for optical fibre deployment, providing next generation mobile services including broadband services in underserved and unserved areas particularly in Balochistan and Khyber Pakhtunkhwa.
It is indeed very promising that more than 3000 previously unserved mauzas have been provided with ICT services and approximately 6000 km of fiber optic cable has been laid under USF programs across Pakistan.
The minister said the impetus of broadband proliferation after introduction of 3G/4G services in 2014 has been phenomenal where broadband penetration which was less than 3% in 2013 has crossed 24% today.
“We believe such projects will be instrumental in maintaining pace of broadband growth.

The Ministry of IT and Telecommunications is pursuing the agenda of Digital Pakistan, with dedication and pledge in connecting the unconnected particularly in far flung areas.”
The role of telecom operators is also appreciable being partners in these initiatives aimed at social uplift of the people, she added.
“We will successfully complete these projects and bring next phase of progress to the people of these areas, ” she hoped.