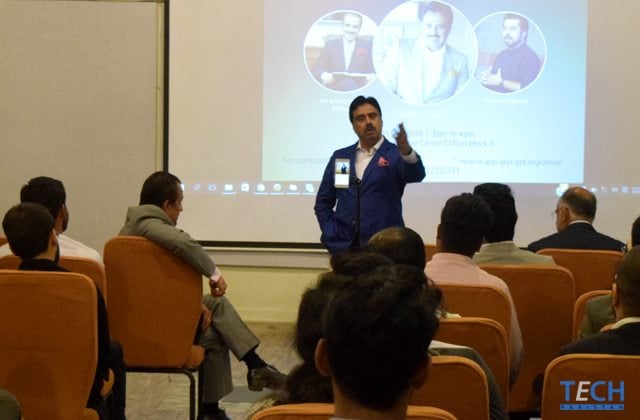 On a journey to bridge the gap between emerging technological youth and flourishing minds, TECH Association of Pakistan held yet another official meetup at Nucleus, Business Executive Centre.

A private setup by the organization, the event was addressed by big names of the technological industry including Salim Ghauri – CEO of NetSol and Mir Mohammad Ali Khan – Investment Banker and Entrepreneur who presented the engaging audience on the topic “Entrepreneurial Behavior Startup Hype or Reality”.

Mr. Kanwal Masroor – the Chairman of TECH Pakistan, created an affectionate yet engaging atmosphere to allow the youth to involve themselves fully in the addressors’ words. He also complimented the extra-ordinary efforts of CEO of NetSol and his relation with TECH.

Starting first on a positive note, Mr. Mohammad Ali Khan highlighted and appreciated the efforts of Mr. Salim Ghauri and defined him a true leader known for humility and humbleness. He said that leaders are not made by themselves. They are in fact called as leaders and followed by others.

Mr. Salim Ghauri came on the ramp and started his presentation with the note that entrepreneurs are born with the ability to lead. They are risk-takers. They have this ability instilled in them. He shared his life experience of selling from a food stall at the stadium of Lahore. The setup though failed but gained him confidence that he could perform such similar activities. He kept on experimenting with different ventures and failed but did not give up hope.

Finally, in 1995 he started NetSol. The idea behind this setup for Mr. Ghauri was not money but work. He said that for the first time he did care about money. He started getting projects and earned a significant amount of money. From here, he took his company to where it stands today.

Speaking for Entrepreneurship, he said that it is all about seeing opportunities and starting working for them to benefit people. He encouraged the youth to enter the sector of information technology which he believes is ever-growing. He further accepts that the idea to start-your-own-business seems easy but in reality it is not.

He added that graduating students decide to start their business from day one, which is not the right move. The exposure to deal with clients, cash handling, problems of day-to-day operations cannot be handled perfectly by students straight-away who have no work experience. Thus he stressed upon getting polished by doing jobs in their respective fields. Furthermore, being hasty for success does not work. One has to have this patience which brings success with time.

This TECH’s event was a phenomenal success as it laid foundations for emerging entrepreneurs to seek opportunities for work. The event received amazing response from the audience, their enthusiasm was phenomenal as they applauded from time to time listening to the wonderful talk. The question / answer part marked an end to the session. Some outstanding questions were asked by the audience, returned by brilliant answers by the speaker.