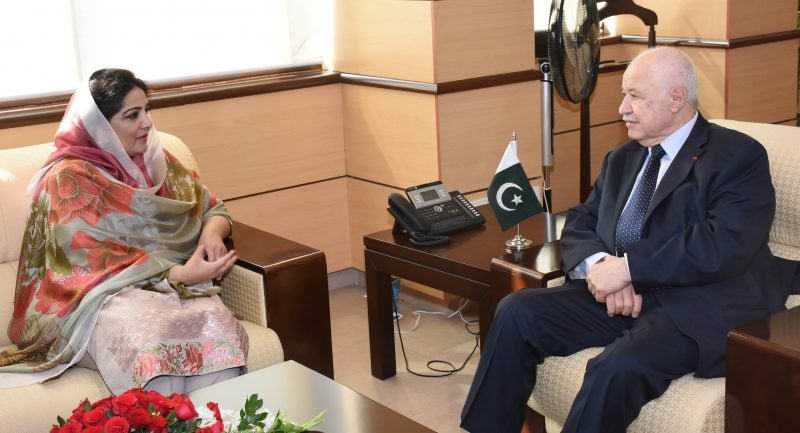 Minister welcomed the distinguished guest and thanked him for accepting her invitation to visit Pakistan. The delegates shared some remarkable initiatives and achievements of Tag.Org with the Minister for promotion of ICTs in Jordan and other areas of the world.  The Minister appreciated the role of TAG.Org in creation of new opportunities in ICTs through new business and training modules and its remarkable services rendered for the development of ICTs specially for women and girls.

Anusha Rahman shared with the delegates that our government is pursuing the agenda of “Accelerated Digitalization” with special emphasis on bridging broadband divide to spur socio economic growth across the length and breadth of the country to expend and enhance the volume of our knowledge based economy. Due to our strenuous efforts our broadband penetration ratio is surpassing 25% which was merely less than 3% earlier.

Mr. Ghazaleh stated that his organization is providing a platform to the Arabs & other Muslim countries to work on common ICT Agenda because we believe that future of the world is based on Information Technology. Therefore, we have established 1500 “Knowledge Centers” around the world for online learning in order to equip our future generation with modern technical knowledge and skills and also offered to establish a “Model Knowledge Center” here in Pakistan too.

Minister while appreciating their spirit said that our government is also focusing on distant learning for this purpose we are going to establish 500 telecenters in un-served and underserved areas of the country and initially 30 sites have been finalized where construction work would be started very soon.

She further said that we are committed to provide next generation broadband connectivity to even remote rural areas of the country through broadband for sustainable development program which is being funded by USF and by 2018, the whole country, where no ICT connectivity today will be connected In Sha ALLAH.

Minister also shared some key initiatives under taken by MoIT&T for achieving gender empowerment through various projects, including “ICT for Girls.  She said that ICTs program was initiated to increase the employability potential of marginalized young girls at 150 Bait-ul-Mal operated women empowerment centers.  The second component of the initiative is the Microsoft’s 4C training program. Under this program, 100 master trainers have been trained, who have been further assigned to impart training to thousands of girls.

Anusha Rahman further said that training of young entrepreneurs and ICT graduates startup always remained our policy focus.  Therefore we have established a state of the art “National ICT incubation Centre” in a public private partnership mode. The main purpose of this project was to transform innovative ideas of talented young teams into viable and self sustainable, startup companies through appropriate training, mentorship and facilitation.

Mr. Ghazaleh appreciated the vision of the government and Minister for IT and hailed all the initiatives being carried out by the Minister of IT & Telecom for development of ICTs in the region and expressed his keenness to work with MoIT in collaboration in near future.