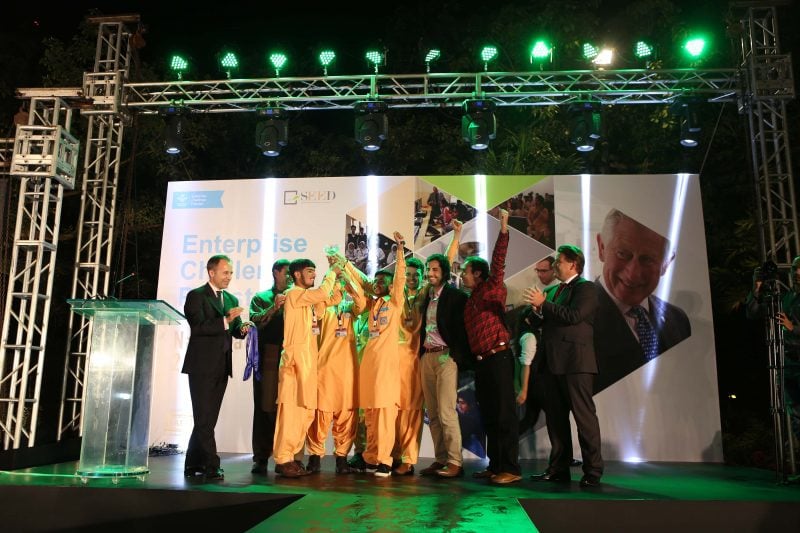 Enterprise Challenge Pakistan National Finals, a Prince’s Trust International Initiative, was held at the British Deputy High Commission on 18th November. The programme was launched in earlier last year in September 2015 in Pakistan after doing a successful run in the UK since 2008, and the Middle East following that. SEED Ventures, a Social Entrepreneurship & Equity Development, organisation, and investment firm, launched and executed the programme with the first cycle culminating this November all across Pakistan. Enterprise Challenge Pakistan (ECP) is supported by ZAFA Group.

It is essentially a simulation challenge designed to instil entrepreneurship in young people in the age bracket of 13-16 years, who learn the basics of setting up their own enterprises with the help of mentors. In Pakistan, Enterprise Challenge has been executed at national level, across the country in different schools ensuring representation of all provinces. Hence, schools from 10 cities have participated in its very first year with 300 students from Karachi, Lahore, Rawalpindi, Islamabad, Quetta, Pashin, Peshawar, Mardan, Muzaffarabad (Kashmir), and Shigar (Gilgit Baltistan). More than 2750 students were engaged out of which these 300 participants were selected through an extensive selection process. The first cycle of Enterprise Challenge culminated with the National Finals where six teams that had emerged from the Regional Finals with the highest scores pitched live in front of a panel of judges and audiences. The winning team was from Pishin, Baluchistan. An audience poll was also held and the team from Gilgit Baltistan was awarded audience choice award.

Talking about this initiative, Thomas Drew, the British High Commissioner said: “The first time I had heard that Enterprise Challenge Pakistan was being executed in schools, I thought to myself what a great age group that must be to introduce entrepreneurship to. I commend Prince’s Trust International and SEED Ventures for introducing this innovative and exciting entrepreneurship programme in Pakistan, and assure the UK Government’s full support now, and in the coming years.”

Faraz Khan, SEED CEO and Co-founder said, “Enterprise Development is SEED’s core mandate, and we have been aggressively following this mandate through entrepreneurial education and training, but the buck does not stop there. We need to engage our budding entrepreneurs from a very early age as they have the potential to resolve the economic challenges and bring about an immensely noticeable change in the country’s economy.”

SEED Ventures is a social, entrepreneurship and equity development organisation. Its core mandate is to provide solutions to social challenges, using entrepreneurship as a vehicle to create wealth and deliver positive social impact.

Mate 9 of Huawei marks its territory in a HUGE way!