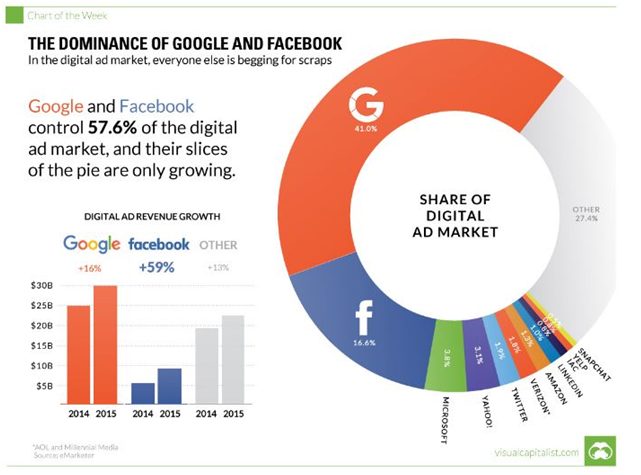 Online advertising can be elaborated as businesses offer ads over web to promote their products and social messages. The promotional messages are delivered through emails, social media website, search engines, banner ads etc. Digital ad marketing is expected to pass television to become the largest ad market in existence in the next few years.

Now a day Google and Facebook dominates the current market of digital ad marketing. It has been noted that both of the companies occupies about 57.6 % of space in the graph of ads trafficking. The two biggest technology behemoths in this world rely on digital advertising as their one major source of revenue. A new online study details how the two companies control this multi-billion dollar industry.

Google is supposed to be the face of the internet, attracting billions of search queries every day. It is providing immediate and appropriate solutions to billions of seekers. Facebook a social worm, influencing on every sphere of life with over one and a half billion users, is the internet’s very own social hub.

Google is still leading digital ad, controls 41% of the market, followed by Facebook at 16.6%. Microsoft is far behind with 3.8%, followed by Yahoo, Twitter, Verizon, Amazon, etc.

You will be even more astonished upon the fact that their share has increased. While considering a yearly analysis, Google increased its market share over 16% while Facebook nearly doubled it with a 59% increase.

In a nutshell, Digital advertising is much more effective than traditional ways, providing ease of access to the news. It is more convenient for both, the customers and the marketers. Considering the last few decades, companies in technology have very quick rise and fall periods. It remains to be seen if these two advertising giants (Google and Facebook) can maintain their dominance in this field.

Innovation of room service robots thrills the world of technology