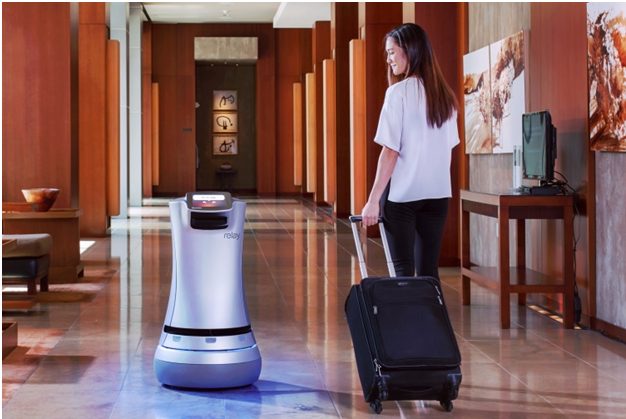 Innovation of room service robots thrills the world of technology

This uniquely designed compact robot, outfitted with 3D cameras, was loaded up with a bath kit, a newspaper and a spare towel. SaviOne is able to autonomously navigate through lobbies, up elevators, down hallways, and around obstacles to deliver small items like snacks to any room in a hotel.

These robots are able to handle repetitive tasks, learn to do new ones. These vertically integrated, function-specific robots can perceive their environments and are available at all hours and be serviced and upgraded easily.

Savioke has made more than 50,000 similar deliveries in six cities across North America.

There will still be a human complement, but in the future they hope that up to 90% of hotel services will be handled by robots. The robots can not only carry out the butler service smoothly, but they can also assist other human resources in the hotel to multitask better. The future of room service has arrived, with a number of hotels are now giving the job to robots instead of humans.

Combination of 3D cameras, real-time processors and machine learning is poised to make an impact that is broader and deeper.

For decades, robots have been too complex, too expensive, and not safe enough to co-exist in human environments. Through a combination of advancements in robotics software and the drop in costs for robotic hardware and components, those objections have disappeared. The time has finally come when robots are going to be at our beck and call, and for our robots in the hospitality industry we mean that quite literally.