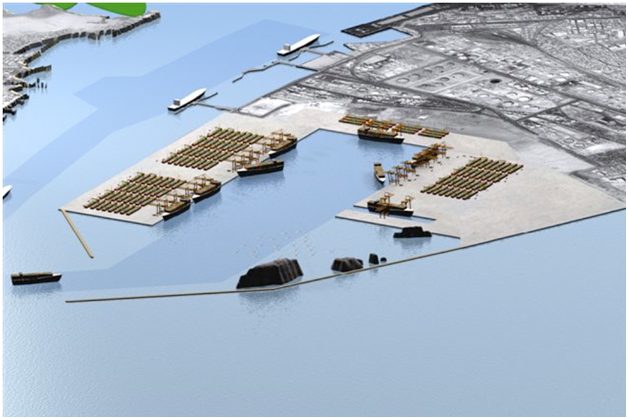 The vessel docked at berth No. 4 of the port for loading around 1,000 (TEUs) of export cargo. However, the vessel having a draft of 12 meters and an overall length of 262 meters is a small vessel for a big port like the PDWCP, which has a designed draft of 18 meters and operational draft of 16 meters.

The APL Japan first called at Karachi International Container Terminal, West Wharf Karachi Port, and unloaded containers of import cargo and later shifted to the PDWCP. Keeping in view safety factors in mind, a small vessel has been deliberately selected for test operations. They hoped that the PDWCP would be inaugurated by Prime Minister Nawaz Sharif in the third week of January.

Hutchison Ports of Hong Kong owns and operates South Asia Pakistan Terminals (SAPT). They have invested $600 million for the port. The company has brought in its equipment as well which includes 5 ships to shore gantry cranes.

Administration, customs and canteen will be accommodated in three buildings whose construction has also been completed. A power plant with a 28 megawatt capacity is also at the ready. In the first phase of development of the port, the company has constructed berths no. 3 and 4. Meanwhile, berth no. 1 and 2 will be completed in the second phase of development.