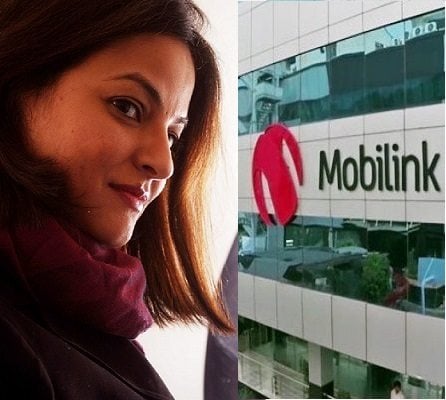 Mobilink has appointed Anjum Rahman as its Director Communication and Sustainability. Anjum will replace Omar Manzur, who left for a part at VimpelCom prior in November 2016.

Mobilink sources affirmed the arrangement and said that Anjum will accept her part at Mobilink from January second, 2017. Anjum Rahman beforehand headed Telenor’s Communication office in 2010-12, preceding which she was connected with Express Media Group.

Anjum has previously served Express News 24/7 senior Producer/Special Correspondent. At Express she additionally used to have a present undertakings television show ‘The Other Line’. Anjum has also worked with The Express Tribune for some time.

Before Express Group, Anjum had served Canadian High Commission where she was in charge of different PR elements of commission and offices.

All the more as of late she was putting forth media consultative to a Johns Hopkins Bloomberg School of Public Health extend. She likewise gave consultancy to World Bank amid her profession.

Anjum will join Mobilink when both Warid and Moblink are experiencing the last periods of a perplexing merger; and Mobilink getting to be distinctly more than 50 Million clients’ organization.

NetMag congratulates Anjum Rahman for her designation, and hope for betterment in her professional carrier, as she will achieve many more successes and achievements like this in her life.

LG’s Mass-Tier Smartphone to be Unveiled at CES