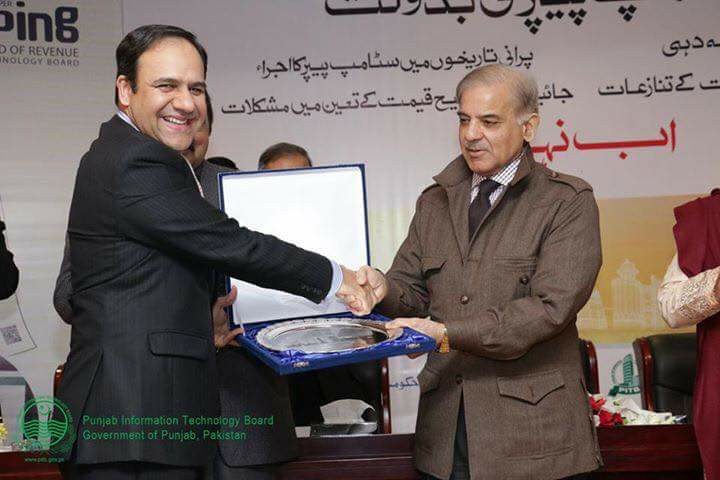 The Government of Punjab, in collaboration with the Punjab Information Technology Board (PITB) has revolutionized the stamp paper system by introducing the e-Stamping Program. Under this program stamp papers can be procured electronically. The citizen is then sent a verification text message to eliminate the possibility of fraud. E-Stamping aims at both curbing corruption in the stamp paper system and making the process more efficient and convenient for citizens.

The project launched by the coordination of the Punjab IT board, Board of Revenue and Bank of Punjab  aims at revolutionizing the stamp paper process by checking forgery and significantly improving citizen experience.

The vision of CM Shabaz Sharif towards a modern Punjab has concluded with another success. A new reign of service and facility has begun. This service will be ensuring transparency, saving the time and money of citizens and earning revenue for the government.

The event was also attended by other dignitaries including the Chief Secretary Punjab, the Minister for Revenue Punjab and the Sr. Member Board of Revenue, as well as a large contingent of media representatives.

Now the issues related to stamping like duplication, frauds, issuing stamp paper in older dates, property disputes and selling property at low prices all will be resolved. More info can be collected at this  https://es.punjab.gov.pk/eStampCitizenPortal/ChallanFormView/HomePage

This e-stamping system will be operational in almost all districts of the Punjab. The staffs of the Punjab Bank and other stakeholders are now trained to be well-versed with the new system. Following link is useful https://www.pitb.gov.pk/

Several Official Government websites are down.