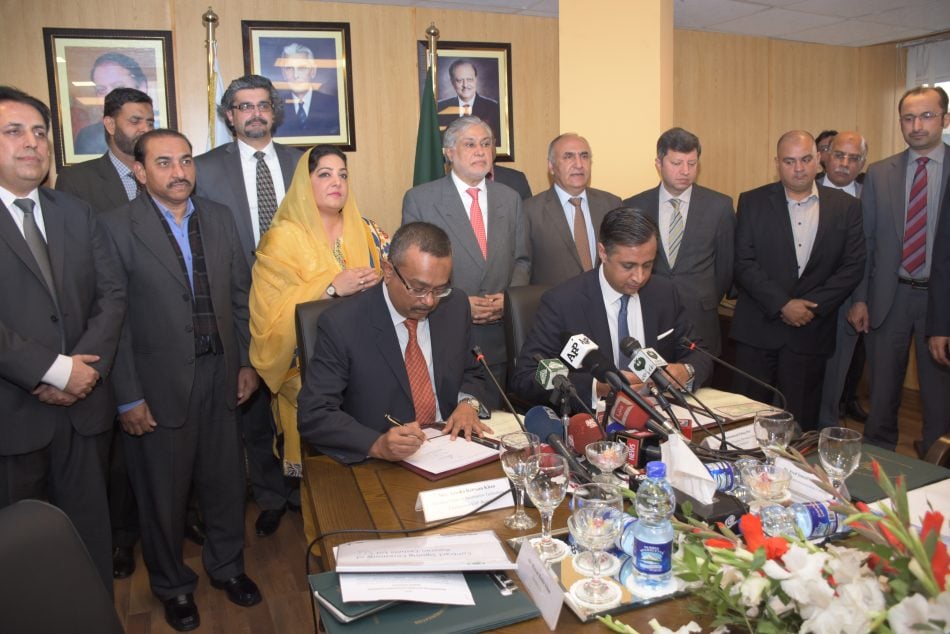 This project will provide Mobile Broadband Internet/3G services to the population in the yet un-served areas of Awaran-Lasbela Lot, consisting of identified unserved 269 Mauzas in Balochistan with an approximate unserved population of 196,177 covering an area of 39,434 Sq. Ft.

Minister for Information Technology, Mrs. Anusha Rahman was also present at the signing ceremony. Speaking on the occasion, Mrs. Anusha Rahman while making an presentation said that the Government of Pakistan is striving to increase the level of telecom penetration significantly in the under-served and un-served areas. She reiterated the present government’s determination to promote and support the initiatives to enhance Pakistan’s capacity to deliver full value chain of security for people of all areas from rural and urban. She was also pleased that with consistent efforts and spirit, Universal Service Fund is undertaking challenging and productive programs for the promotion of telecom related services. She further said that this project was surely another milestone achieved with the purpose of triggering technological growth in the country.

While sharing the landmark achievements of the Ministry of IT, Anusha Rehman said that we are successfully pursuing the ICTs for Girls Project. Therefore, we received international recognition in the shape of “Gemtech Award 2015” and now we are going to provide latest computer labs to the 107 girl’s schools of Islamabad Capital Terrority and 97 teachers are also being trained through Microsoft to make this endeavor more result oriented and on a larger scale.

She further said that we are launching a special project for provision of broadband to the low income woman of Baluchistan and through this pilot project mobile sets with balance will be provided to the woman so that we could ensure the provision of complete value chain to the woman of lower income strata.

Chief Guest of the ceremony Federal Minister for Finance, Revenue, Economic Affairs, Statistics and Privatization; Senator Mohammad Ishaq Dar while addressing the ceremony stated that MoIT has a great role in uplifting of IT sector in the country. He congratulated the Minister Anusha Rehman and her whole team of Ministry of IT, PTA and USF for their landmark achievements in the arena of ICT. He said that our government has a special focus on the technological and financial inclusion and due to our strenuous efforts Pakistan is being ranked in top five countries having maximum financial inclusion and now the credible International financial institutions are calculating our GDP ratio from 5 to 5.2 in their recent studies which shows that our economy is gaining more stability with each passing day and it will be amongst top 17 economies of the world by 2030. He further said that stock exchange merger was another glaring example of financial inclusion which we have done successfully within less than a year. He further said that transparency and efficiency are two main salient features of our governance. We received 160 billion in the last three years in National Exchequer through transparent spectrum auctions which was being calculated in millions earlier.

Let’s see what Huawei is offering for New Year Gifts

Double-Up offer by PTCL thrills customers on this New Year