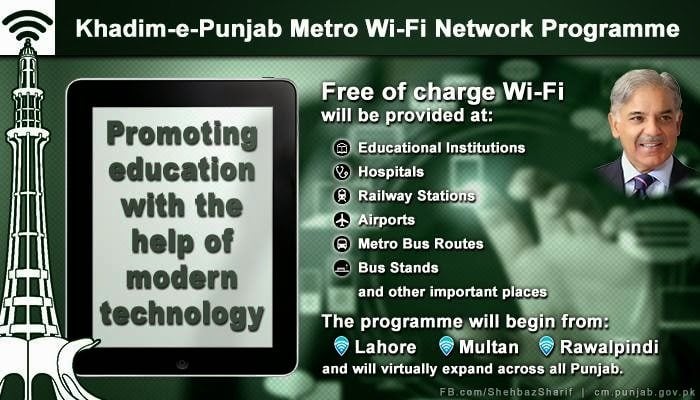 All around the world, the usage of internet is extremely common, and free wifi now has become a necessity for any good restaurant or library, and now every household has wifi. Free wifi can be found in many places, and all around the world, most of the developed countries usually offer wifi all around the cities, so people can easily access, and now this will soon be the case with Punjab as well.

Recently, Mian Muhammad Shahbaz Sharif, the chief minister of Punjab announced that free wifi would be launched, from Lahore, Rawalpindi, and Multan, and soon in other cities of Punjab too. The chief minister announced that the free wifi facility will be launched at educational institutes, railway stations, airports, and other public locations. The scheme is named Khadim-e-Punjab Metro WiFi network program. Students will quite easily have free access to the internet, and this will not only boost the level of education amongst students as they will be able to access the internet to help them with their studies, but it will also boost the use of technology in a developing country like Pakistan. The chief minister also launched a scheme of free laptops for brilliant students of Punjab, and this will also allow these students to properly utilize their laptops and other devices.

This is a great initiative taken by the Punjab government because this will allow the students to study with endless opportunities. Students now might search google if they do not understand something in a book, or they might watch a video on YouTube, as many tutors, like Khan Academy, are available, with the sole purpose of teaching others, and helping them learn. Not only this, but students might also now contact each other using WhatsApp or other free services and save their money to a great extent. The usage of mobile and internet might also now encourage a lame man, so maybe even the illiterate might be encouraged to learn the English language, and learn how to surf the internet!