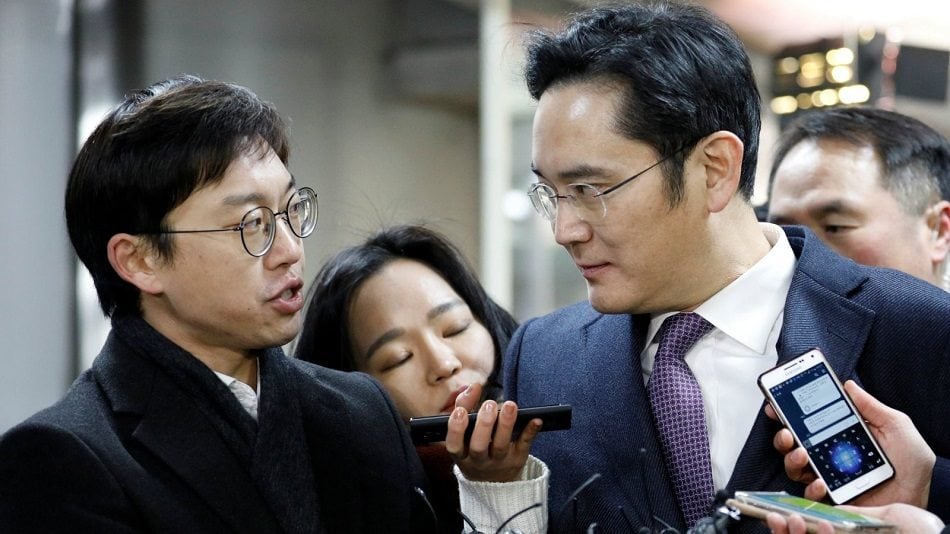 South Korea prosecutors announced they were seeking an arrest warrant for Lee Jae-Yong, the de facto head of Samsung. The court said it would not approve the prosecutors’ request, but prosecutors will still continue with an investigation into his alleged crimes.

Prosecutors have accused Lee of paying 43 billion won (about $36 million) in bribes to president Park Geun-Hye’s guru-esque confidante Choi Soon-sil. Specifically, they say that Lee and Samsung paid Choi so the National Pension Services would approve a merger (paywall) between two Samsung affiliates, Samsung C&T and Cheil Industries, even though the merger disproportionately benefitted the Lee family over C&T shareholders. At least some of the money Samsung doled out reportedly paid for the equestrian career of Choi’s daughter—including $850,000 for a new horse. Korea’s legislature last month voted to impeach president Park after months of massive protests.

Lee is certainly not the only Korean business mogul implicated in the president’s corruption scandal, and his potential conviction also marks just one of several instances wherein Samsung’s leaders have found themselves under scrutiny for corruption. Yet his case highlights how even as anger toward Korea’s business conglomerates swells, they could be too big to punish.

In Korea, it’s families that are too big to fail. The country’s largest businesses, known as chaebol, have been integral to Korea’s miraculous post-war economic growth, and these companies are all largely controlled by the families who established them. After Samsung founder Lee Byung-Chul passed away in 1987, he handed control of the conglomerate over to his third son, Lee Kun-hee. After he suffered a heart attack in 2014, his son Lee Jae-Yong took the reins, though he has yet to be named the chairman of the group.

One of the reasons why chaebol leaders seldom face punishment for corruption is that they hold too much economic power. “Koreans often fear that if the Korean chaebol owner family falls from power, then the larger conglomerate falls from power. And if the larger conglomerate fails, they fear the economy will fall into crisis,” said Sangin Park, professor of economics at Seoul National University.

Samsung’s ownership structure, like most Korean conglomerates, is a byzantine web of separate business units with overlapping shareholders and no formal centralization of power. In 2014, before the controversial merger that helped Lee Jae-Yong consolidate power, Samsung Group’s ownership structure looked like this:

One of the byproducts of the chaebol system is rampant corruption. That’s in part due to their historic ties to the government during Korea’s authoritarian regime, and also their ownership structures. Family members often control their empires indirectly by holding shares across several business units instead of a majority at the top level. This shields chaebol executives and family members from the type of corporate accountability that CEOs and other executives normally face in other countries. As a result, bribery, embezzlement, and fraud are commonplace. Samsung is no exception to this trend—in the 1960s the eldest Lee was accused of smuggling saccharin into Korea but avoided indictment. In 2008, the second Lee was charged with evading taxes, but was not arrested.

There’s some validity behind the fears that Samsung is too big to fail. Samsung Electronics, which brings in most of the money for the overall group, made 200.6 trillion won ($172 billion) in revenue in 2015, equal to about 12% of the country’s GDP. Since Samsung’s dozens of other holdings stretch into so many different industries, from insurance to construction to retail, Seoul University’s Park argues that the division’s collapse could create a “domino game” in the Korean economy.

“If the entire group falls, and with its multitudes of suppliers that depend solely on Samsung, South Korea’s biggest banks are at risk of insolvency,” Park writes in an article from October. That, in turn, could cause Korea to face “an economic crisis more severe than the one it did in 1997,” when the country faced a massive debt crisis.

Furthermore, Samsung Electronics is in need of strong leadership at this moment. Like any hardware company, the risks of tougher competition and commoditization looms. While its booming components division is keeping investors happy, growth in handset sales is slowing globally. Meanwhile, the Galaxy Note 7 explosion fiasco suggests that these pressures have led to mismanagement. Though Lee is known as a hands-off leader, he reportedly was a key player in the swift recall of the devices, a decision that came against the will of other executives (paywall).

Since Lee won’t get arrested in the short term, he remains acting head of the company during the investigation. But if the investigation turns into a trial and later prison time, a leadership void could emerge. Geoffrey Cain, author of an upcoming book about Samsung, says that as a worst case scenario, a boardroom coup could cripple the company in Lee’s absence.

“Jay Y. Lee is in a vulnerable position,” Cain says. “The cross-shareholding system is like a yarn ball, if someone finds just the right place to tug, they could pull out the right part and the whole thing could fall apart overnight.”

The Korean public once tolerated corruption like the kind that Lee allegedly engaged in. But resentment toward the chaebol has increased significantly in recent years, as the slowing economy highlights discrepancies between the haves and the have-nots.

One of the most visceral displays of this anger came during a 2014 incident dubbed “Nut Rage,” when the daughter of Cho Yang-ho, owner of Korean Airlines, ordered a plane back to its gate when she was unhappy with the macadamia nuts a flight attendant served. The incident sparked a frenzy in Korea as citizens saw her tantrum as symbolic of chaebol families’ privilege and sense of entitlement.

2016 was a particularly troublesome year for chaebol in Korea. In August, a top executive at the Lotte Group, which has malls and hotels all over Korea (and is best known abroad for its confectionery), killed himself amid a corruption scandal. In September, shipping conglomerate Hanjin declared bankruptcy, and its former chairwoman was investigated for insider trading. Meanwhile, Korea’s normally chaebol-friendly news outlets started to turn their backs on Samsung during the Galaxy Note 7 fiasco, suggesting the tradition of giving Korean corporations a free pass was ending.

“The issue that really weighs on Koreans’ minds is inequality, and nothing represents the state of inequality better than the dominance of chaebol on the national economy,” says Koo Se-Woong, managing editor at Korea Expose, an online publication. “The chaebol has a certain immunity in Korea, and people resent them for it.”

During her campaigning, one of Park Geun-hye’s promises was to keep the chaebol accountable. But such hopes were shattered when she pardoned Chey Tae-won, chairman of SK Group, best known as a leading telecom provider, in the middle of a four-year prison stint.

Now that Park has lost credibility in the eyes of the public, the Korean government has a new opportunity to assert this accountability.

Koo says that the prosecutors’ office has “demonstrated the significant commitment to finding out what exactly happened,” suggesting that Lee might face a fair trial with real consequences. But if Lee gets off with a light punishment, “it will be a sign that things are the same as they have always been in Korea, and that nothing has really changed as an outcome of the Choi Soon-sil scandal.”