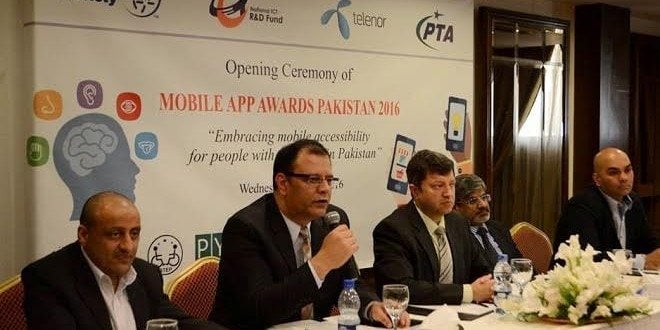 Ms. AnushaRahman Khan, Minister of State for Information Technology and Telecommunication will be the guest of honor. Chairman PTA Dr. Syed Ismial Shah, Members of PTA and MoIT, representatives from telecom mobile operators, internet service providers, and academic institutions will attend this event.

“Pakistan Mobile App Award 2016” invited young mobile application developers to present their novel creations to compete for the coveted honor. The competition themewas  “Embracing Mobile Accessibility”, which aimed to focus on the development of mobile applications for the needs of Persons with Disabilities (PWDs) in Pakistan.  The independent international sources quote that about ten to fifteen percent of Pakistan’s population consists of PWDs. Therefore, it is imperative that the rapid technological developments in the mobile sector enable the PWDs to lead a better life, be more self-sufficient and more importantly, become an earning hand for their families.

Through the competition awareness sessions were also organized, which were conducted for students and professional mobile application developers in major cities of the country. The main aim of these workshops was to raise awareness on mobile accessibility and providing interaction with persons with disabilities to brainstorm on their needs. These workshops were organized in major cities of Pakistan including Islamabad, Lahore, Karachi, Peshawar and Quetta. These workshops signed up individuals or group of individuals, who were interested in developing a mobile application and competing for the awards.

Winner team of “Mobile Application Award 2016” will be awarded cash prize ofRs. 300,000. If winning team will like to turn their solution into functioning startup it will also be offered acceleration through formal incubation into the PTA’s M-Lab, depending on interest and fit. 1st Runner of the competitions will be awarded cash prize ofRs. 200,000 and2nd Runner team will be awarded Rs 100,000. Two consolation prizes of Rs. 50,000 each for the contestants on the basis of potential in their application and presented ideas will also be given.