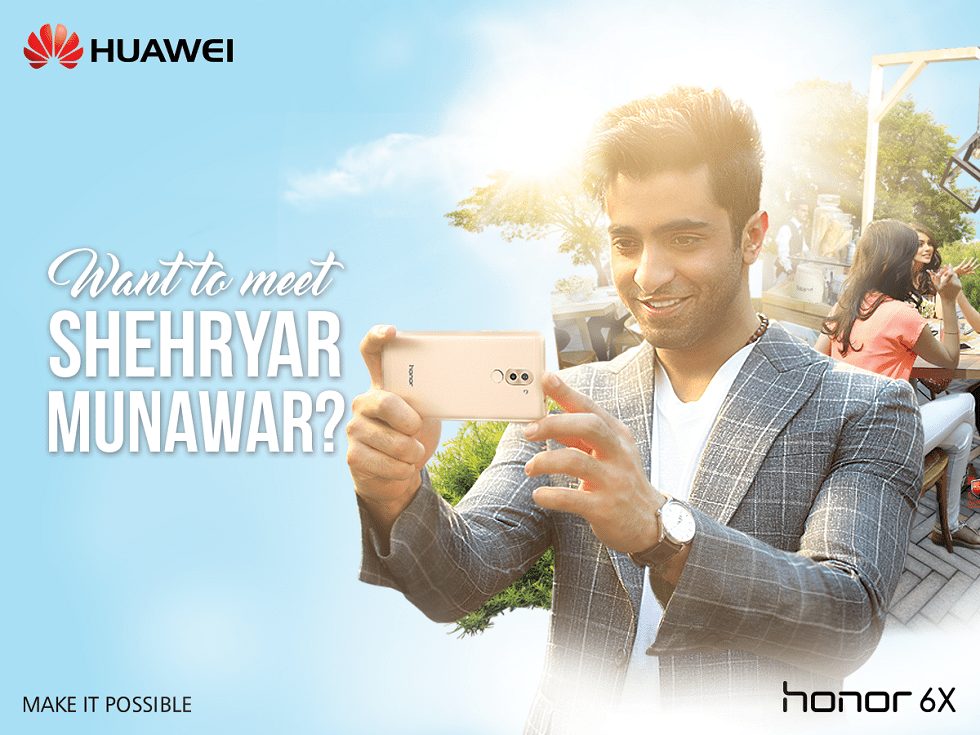 The leading telecom technology enterprise Huawei is now giving a special opportunity to its Honor users to meet and greet the young and vibrant Pakistani heart-throb – Shehryar Munawar in the Fortress Mall by 11th February 2017.

Known for treating its customers consistently, Huawei is yet again providing its fans a thrilling opportunity to meet its brand ambassador – Shehryar Munawar. Huawei Honor users will get a chance to personally meet Shehryar Munawar, take selfies and spend memorable fan moments in the Fortress Mall.

The famous young actor, model, and film producer; Sheheryar Munawar Siddiqui recently came on board with Huawei for its Honor 6X campaign that promises to deliver a revolutionary camera experience to its users. Shehryar attained celebrity status for his acting performance in the Hum TV Drama serial “MerayDardKo Jo Suzan Miley”. Initially, Sheheryar appeared in showbiz as a model and later he ventured into acting and production. Today, he enjoys outstanding popularity in the Pakistani media, especially among the younger segment of the audience. His other notable performances were seen in roles such as; TanhaiyanNayeSilsilay, KahiUnKahi, ZindagiGulzarHai and Aasmanon Pay Likha.

His youthful vibrancy along with the gift of bringing something new-to-the-table every time blends perfectly with Huawei’s DNA of keeping users up-to-date with the most innovative smartphone technology in all aspects, from revolutionary design to one-of-a-kind tech features.

Huawei is committed to delivering exceptional services to the rapidly expanding segment of smartphone users in Pakistan, who seek powerful global connectivity and infotainment, round-the-clock, on-the-go. To stay updated on many more exciting opportunities, follow Huawei’s Facebook and Instagram page.