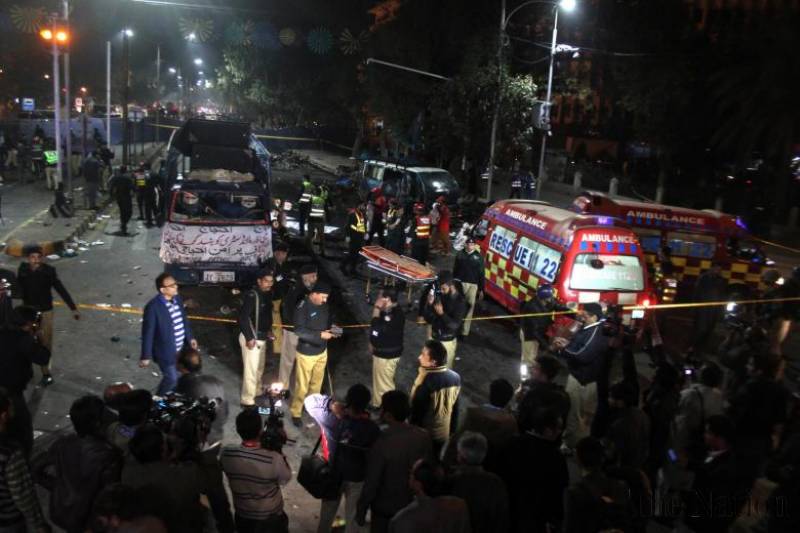 The nation is proud of all the country’s security institutions including police and traffic police which had offered historic sacrifices in this war against terrorism. Suicide attacks like this have caused great loss to our country but we still have not left hope, and we will keep fighting against these brutal enemies committing such surprise attacks.

The incident is a question mark before Safe City Project that was implemented by spending millions of taxpayers. Under this project, 8000 surveillance cameras were planted to watch over the Lahore and detect any suspicious activity.

This suicide bombing took place on 13th of February on the Mall Road in Lahore, Pakistan, where a group of pharmacists and chemist were holding a protest in front of the Punjab Assembly. Rescue 1122 sources claimed that at least 18 people were killed including several police officials, and at least 90 were injured in the blast.

Among the others, martyrs, DIG Traffic Police Captain (retd.) Mubeen Zaidi and acting DIG Operations Zahid Gondal were also a great loss to the nations. This a proof to the world that our officials and executives have never set aside from any sacrifice if it’s for the dignity of Pakistan. We salute all the martyrs of Lahore blast.

Jamaat-ul-Ahrar, a faction of the banned Tehrik-i-Taliban (TTP), claimed responsibility for the attack. Local authorities cordoned off the site to begin investigations.

Punjab government spent billions on Safe City Projects to place the high definition ANPR cameras that can zoom out and watch carefully any suspicion. Public just wonders that too many HD cameras couldn’t keep an eye on a sensitive area where hundreds of protestors were present while DIG was negotiating with representatives of association, how one can trust that this camera would guarantee the security of other citizens who are more vulnerable.

An earlier notice that was sent to Home Secretary Punjab, Provincial Police Officer and DG Pakistan Rangers (Punjab) on February 7, NACTA had directed to put the vital installations including important buildings, hospitals, and schools under strict vigilance. Many security agencies and police officials were covering the road of Lahore in civilian dressing, yet we Pakistan has to suffer such great loss.

These sacrifices rendered by the sons of the soil in the war against terrorism would not go in vein as the state is fully committed to fighting this menace and the revenge of each drop of blood must be taken from these brutal terrorists.

We strongly condemn the terrorist incident in Lahore and convey our condolences to the families of all those including police officers, who embraced martyrdom.

Vested interest holders will not be tolerated at TIP