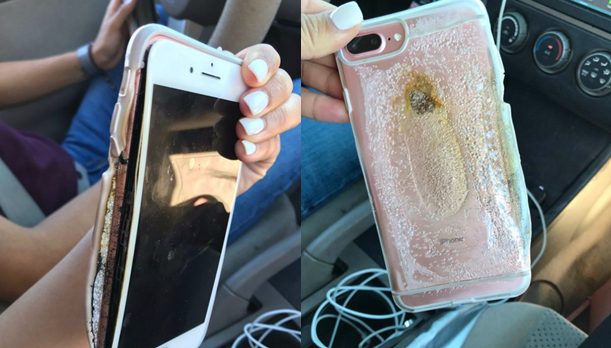 Apple has begun its investigation on an exploded iPhone 7 Plus due to overnight charging, after a video of the incident got viral on the social media, which was clicked over million times.

Brianna Olivas, an 18-year-old girl, living in Tuscon, Arizona, posted a footage showing delirious smoke gushing out of one side of the iPhone while rose pink case was fusing away. She brought her phone to the Apple store to report a disorder about her gadget, before the explosion, but there was no error found on the phone. But then her phone exploded.

Brianna says, “The phone was charging next to her bed and afterwards her friend noticed the happenings first. Afterward, he grabbed that bursting phone and went with the device to the bathroom. More smoke came out of the phone and it even explodes.”

Apple took rapid action after seeing the viral video, while on Mashable, an Apple representative depicts, “We are in touch with the customer and looking into it.”

The owner of the iPhone 7 Plus rose gold, Brianna Olivas, handed her phone to the company, so they could be able to perform certain tests on it and provide her with a conclusion within a week.