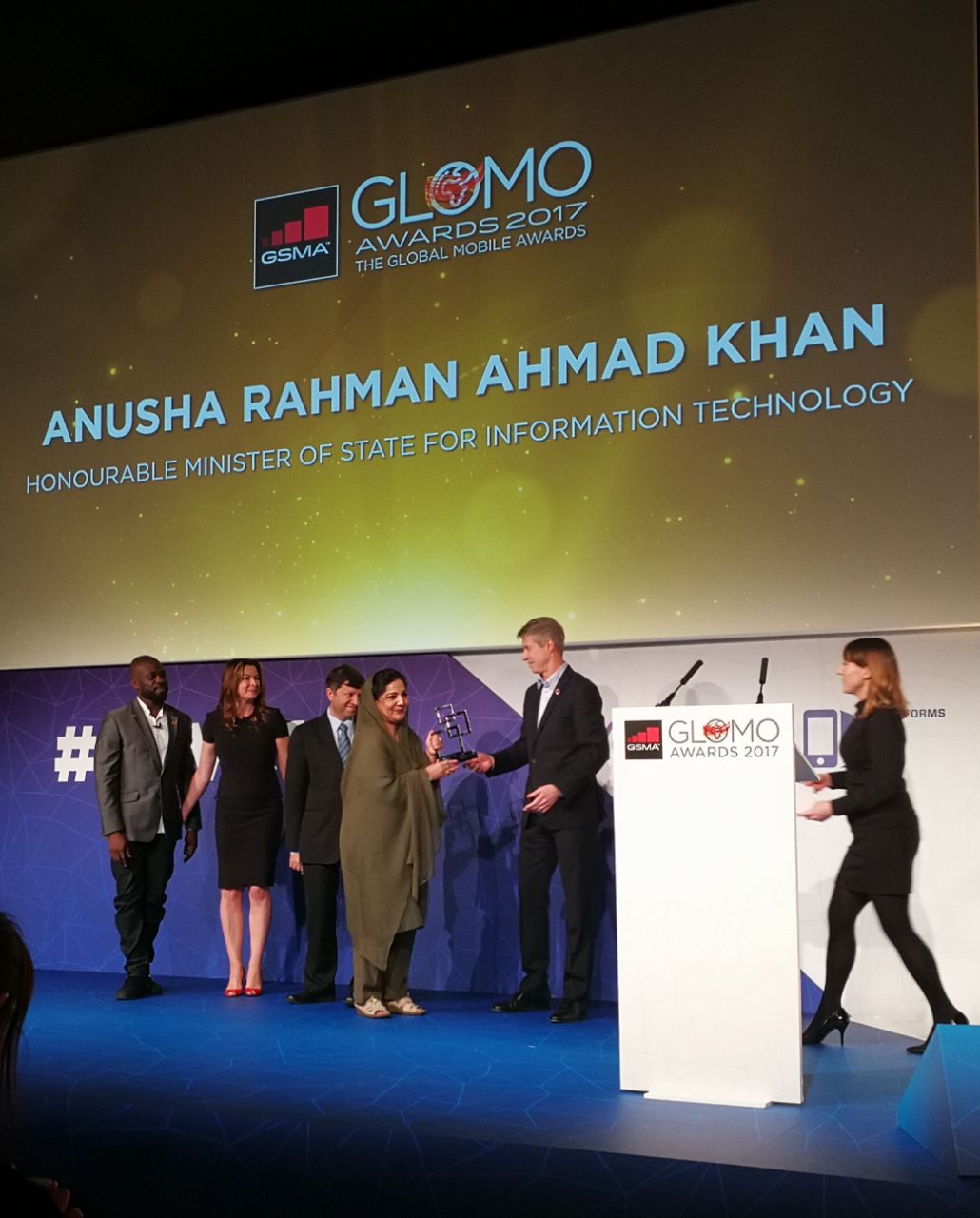 In the most significant development for the Telecom sector of Pakistan during the past decade, the Government of Pakistan has been declared the winner of the “GSMA Government Leadership Award 2017” at the biggest annual telecom industry gathering at the Mobile World Congress in Barcelona Spain. The Award was received by the Minister of State for IT &T and Telecom Ms. Anusha Rahman during the Global Mobile awards and goes on to confirm the worldwide acclaim and global recognition of the Government’s Telecommunication Policy 2015.

While accepting the award on behalf of Government of Pakistan, Anusha thanked the global telecom community and the GSM Association for reiterating its confidence and trust in the telecom sector policies of the Government of Pakistan. While attributing the success to the hard work of professionals at MoIT&T, PTA and FAB she further added that “This award is recognition of the Pakistan’s policy soundness and the vision of the government under the leadership of Prime Minister Nawaz Sharif for the telecommunication sector in Pakistan by the international community”. She congratulated the Prime Minister of Pakistan and the Pakistani people on winning the Second Global GSMA award in a short span of two years. It is pertinent to mention that Pakistan was awarded the Leadership award for transparent and market building Spectrum Auction in 2015. Grant of two major Global Mobile awards for within a short span of three years of the current government is historical and the 2017 award is significant as it carries the highest significance globally for Government’s policy initiatives and development of digital markets.

The Minister highlighted that the “Telecommunication Policy 2015” has been recognized by the international community for its sound provisions catering for the availability of universal, affordable and quality telecommunication services provided through open, competitive and well-managed markets which can be used by people to the benefit of the economy and society. She added that the award also recognizes the measures laid down in the policy that is expected to make telecom market more efficient in terms of quality of service and choice of services available to the consumers; and the Policy is expected to boost the Telecommunications as well as ancillary ICT sector markets, spur socio-economic development and will act as a catalyst towards achieving knowledge based society with digital inclusion of all segments of our society.
On the sidelines of the Barcelona event The Minister of State for Information Technology & Telecommunication also held a meeting with the Chairman of the ICANN (Internet Corporation for Assigned Names and Numbers) Mr. Goran Morby as well as host of other global telecom industry leaders including top leadership of the Etisalat, Telenor and Vimplecom groups and invited them to partner with the government to take the benefits of the digital revolution to all segments of Pakistani society. The global technology leaders congratulated the Minister of receiving the Leadership Award and expressed full industry commitment to her initiatives for achieving an inclusive digital economy in Pakistan for the benefit of both the masses and the industry.
Tags: