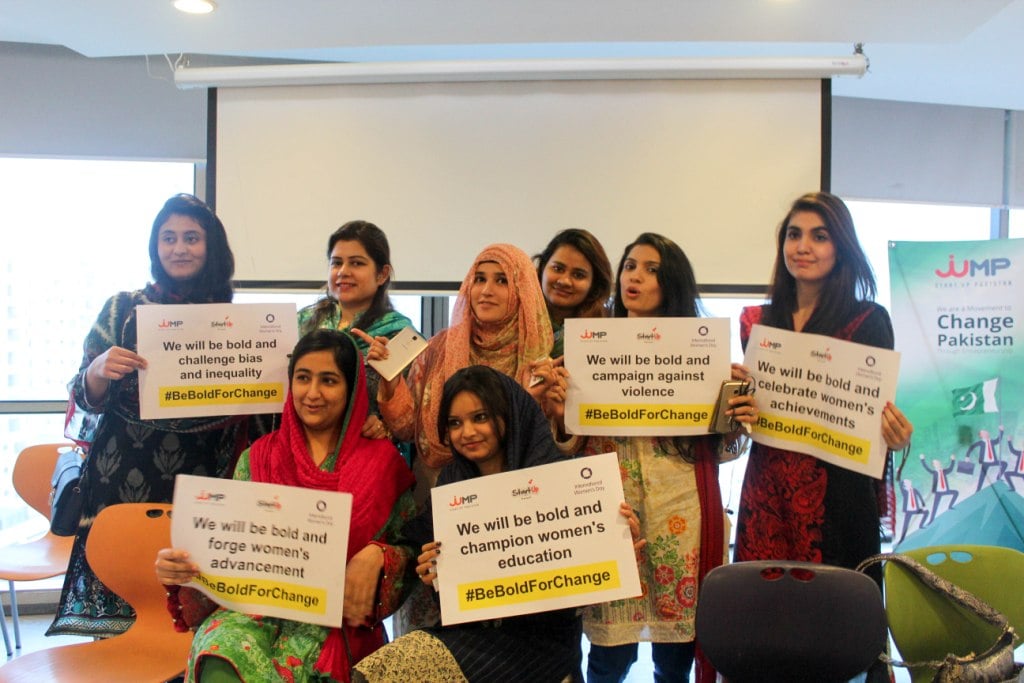 International Women’s Day is a global celebration to recognize achievements made by women around the World and to support global actions needed to accelerate gender parity. With the objective to create a more gender inclusive world, Jumpstart Pakistan has always facilitated Women Entrepreneurs in becoming responsive and responsible leaders.
On 8th March 2017 through a meaningful celebration & targeted bold action JumpStart Pakistan celebrated International Women’s Day at DotZero Karachi. This gathering was well attended by Women Entrepreneurs. Among the invited speakers were professional women including successful women entrepreneurs who have created a mark in their respective industry and also women who are holding senior posts in various organizations and among the government. 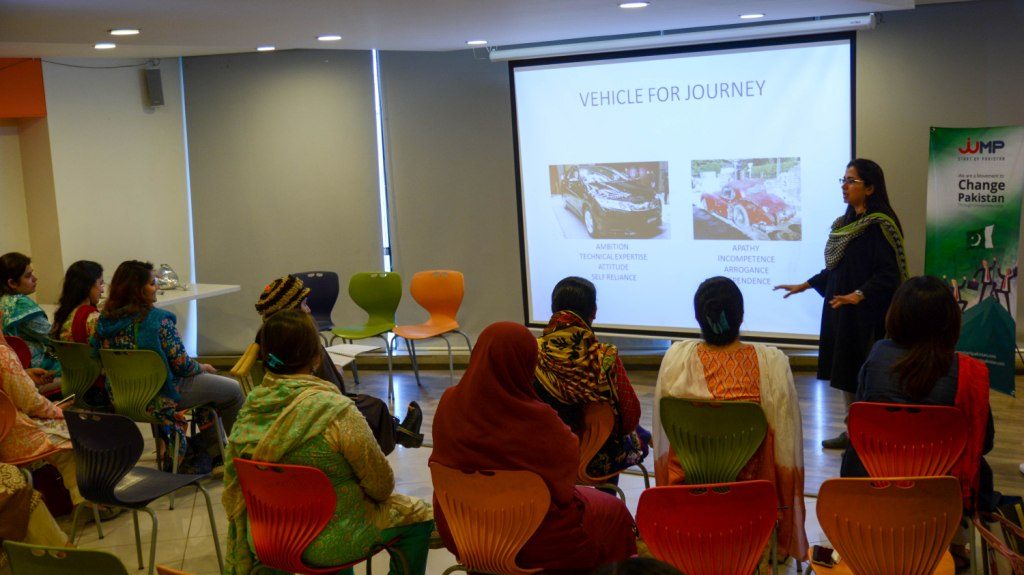 The session started with the President of JumpStart Karachi chapter Ms Eram Abbasi, introducing Jumpstart Pakistan, its aims and objectives, how it is stimulating and supporting the startup ecosystem in Pakistan and how it is operating in various cities across Pakistan. Ms Eram also gave a talk to motivate women to come forward and play an active role in the society. Her talk included some guidelines and tips on how they can manage the work life and home life together. She said that even housewives can play an important role in society. They can also start a home business and operate while staying at home.

Ms Naheed Memon, who is serving as Chairperson of the Sind Board of Investment was invited as the guest of honour at this event. Being a successful professional woman Ms Naheed is a role model for the working women. She was the CEO of a public policy think tank in Pakistan and headed their research and advocacy function. She is also a Director in her family owned group of companies based in Karachi; the core business unit, Kings Apparel is one of the country’s largest knitwear manufacturers. In London, Ms Naheed worked for Bank of America Merrill Lynch for a number of years. She was the Founder CEO of a management consultancy firm in London which serviced clients including PwC and foreign missions. 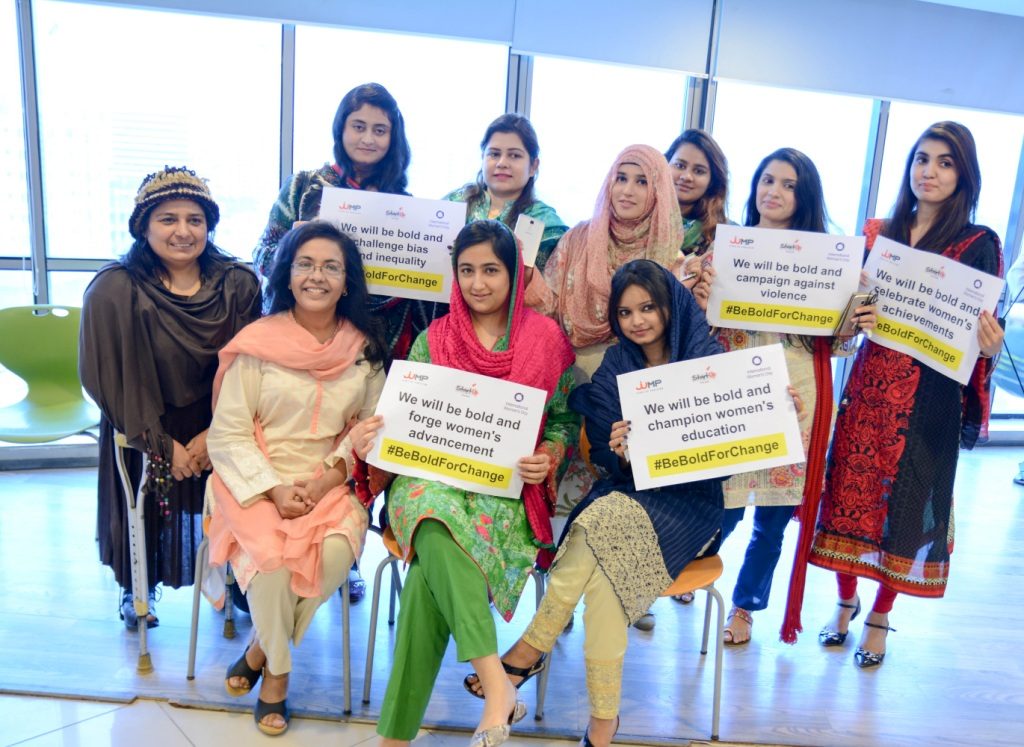 Ms Ayesha Fahad and Ms Sadaf Fatima both very prominent entrepreneurs who are successfully running their business were invited to share their success stories. Both the stories were an eye-opener for the participants. Their journey included success and failure phases, the support that they received from the society and people around them and many such interesting turning points especially how these ladies are managing their business along with family and kids.

Ms Ayesha Fahad, owner of Ashlamour and D2R brands narrated her journey from university days, where she initially was exposed to the concept of entrepreneurship and how she developed her interest to start her own business through participation in business plan competitions and exposure to organizations such as SMEDA (Small and Medium Enterprise Development Authority) and initiatives like Shell Tameer. She took her first risk by starting a handbag business by the name Ashlamour. She herself used to design high-end ethnic bags and get it made at low cost, using labour that worked remotely.  At this stage, she used to sell her product through various outlets. Later on, she got married and due to the constant support by her husband and in-laws she continued her journey. Recently she has launched her second venture by the name D2R (Dream to Reality). This is all about Planners that are diaries with very ethnic and well thought out designs for women to plan their dreams ahead. 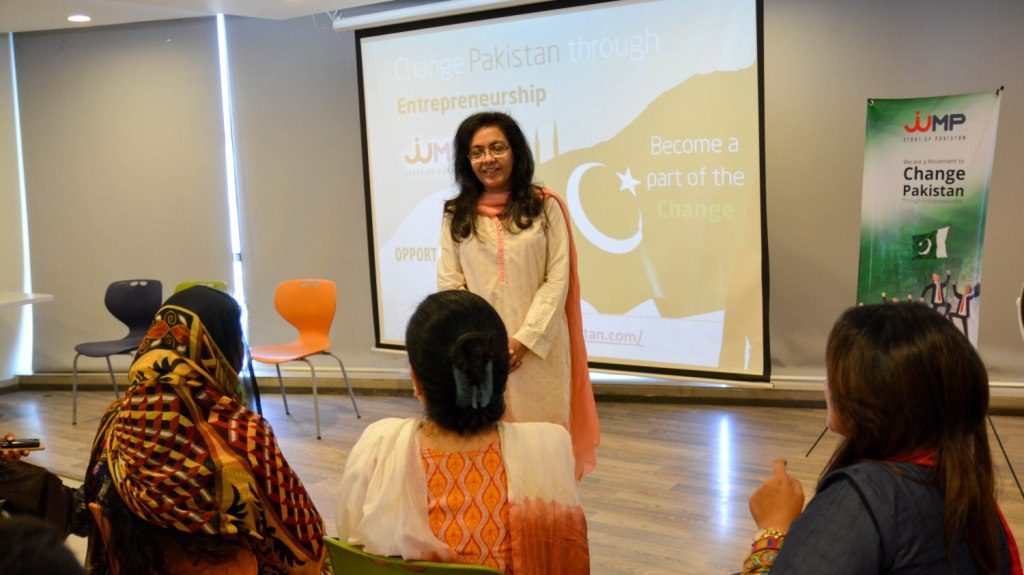 Mrs Sadaf Fatima, an engineer by education and an engineering consultant by profession was the next speaker to share her success story. Sadaf is running her engineering consulting firm with the name of M/S Sadaf Fatima. She narrated her story how, after graduation, she worked with a construction firm for a while which she couldn’t continue after her marriage. Due to her home responsibilities, she started her home-based consultation work. At this stage, her former colleagues and university professors supported her in many ways including getting projects. She single-handedly not only managed her initial projects but at the same time managed her house responsibilities alongside. She eventually rented a home nearby, the dedicated top floor for office work, and gradually hired a team to deal with various projects by fulfilling all the job roles needed for success.

The major commonality among both entrepreneurs was that their families, including husbands, supported them well and their major motivation was the drive to be successful and respectable members of the society.

The participants showed great interest in the talks by the speakers. At the end of the session, an open discussion was held where many recommendations were put forward to promote women entrepreneurs and help women play a vital role in the economy. The way forward was discussed with the commitment to be #BeBoldForChange.