Business Featured How To ICT News
Home - Business - How you can report a fake Facebook profile to FIA Cyber Crime Unit?

How you can report a fake Facebook profile to FIA Cyber Crime Unit?

To prove ourselves responsible citizens and get rid of online terrorism’s all forms of fake profiles, blasphemy and other Cyber crimes on social media, it is our first duty to report Cyber related crimes to FIA Cyber Crime Unit. To deal with technology based crimes, there is the latest introduction to mandate FIA namely National Response Center for Cyber crimes NR3C. NR3C which is the only unit of its kind in Pakistan to deal with directly received complaints as well as it assists or deals with other law enforcement agencies in their own cases.

Cyber crime can be defined as, “Any activity commissioned via computer, digital devices and networks used in the Cyber realm, and is facilitated through the Internet medium. It can include the distant theft of information belonging to an individual, govt or corporate sector through criminal tress-passing into the unauthorized remote system around the world. It includes from stealing

Millions of rupees from online bank to harassing and stalking Cyber users. We met recently Mashal Khan’s case who was killed for posting some blasphemous content on social media though the truth was revealed that content was shared from some Fake Facebook profile user.

From last few months, interior ministry is working to curb the online blasphemy.

You can report a fake profile in two ways.

Click the top right button having opened your Facebook profile, select “Report” option from the menu then selects the reason for which you want to block or report. Some particular person, these reasons will be prompted by Facebook automatically you can select any one desired. 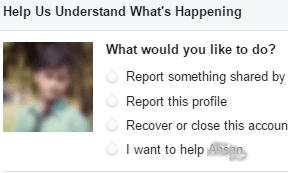 Email the details of any objectionable content online, especially on social media to Pakistan Telecommunication Authority PTA at [email protected]

You can also report fake calls and messages to PTA.

Vice president of Facebook to visit Pakistan next month