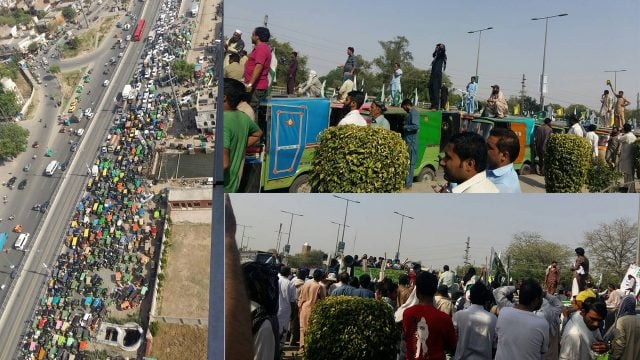 Huge crowd of Rickshaw drivers protesting against Uber and Careem

In this age of competition, everyone is making struggles to prove itself the superior to get authority. Today similar kind of case came to the scene. From the metropolitan city, Lahore, A force of Rickshaw drivers poured out on streets to protest against the e-cab hailing services such as Uber and Careem.

It is reported that rickshaw drivers joined the protest from all over the Lahore.  And this force of drivers joined the protest in from of Punjab Information Technology Board ( PITB) office where numerous rickshaws caused jam-park. Reports also say that drivers started climbing on the roofs of building and onto the roofs of vehicles along with chanted slogans. This road blockage caused severe traffic rush in the adjoining areas.

President of the Rickshaw Union and Green Cab headed the protest rally. Divers unveiled their distress caused by these high-end electronic cab-hailing services. The Rickshaw drivers said that under Careem and Uber,  private cars are being used as public vehicles due to which caused these companies avoid taxes levied on public vehicles. They requested the government to take steps to bring Uber and Careem under the tax umbrella and force these services to comply with the regular clearance systems.

Uber and Careem were launched recently in Pakistan. Because these services provide reliable services on standard rates so people are attracted towards these services. Careem is operating in 6 cities of Pakistan successfully,  while Uber has been launched in three cities of Pakistan including Islamabad. Already we informed our readers that cab drivers are also angry at discounted fares of Uber and Careem and now Rickshaw drivers have come into the play.

No doubt Careem and Uber are doing so good for the public.  Meanwhile,  Rickshaw drivers are not doing something harmful, they are just demonstrating a protest to get income for their family which is their right.

Let us see what happens next and what steps government takes.