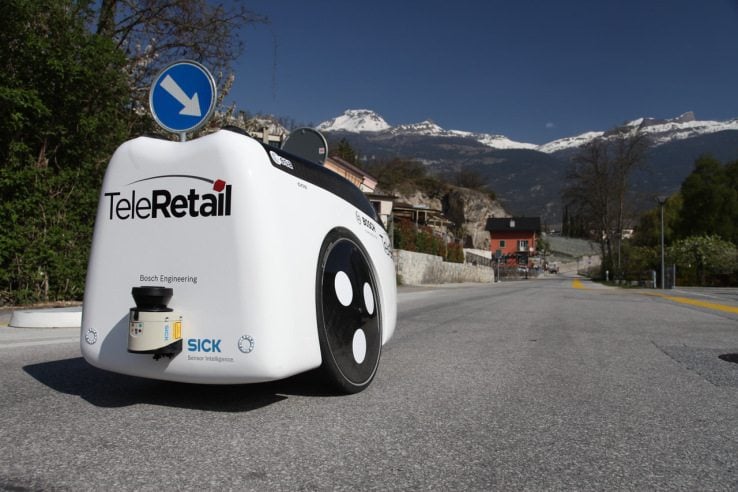 A Swiss startup called Teleretail AG,  has put a twist on the personal delivery device. Its machines were designed to cover long distance upto 50 miles.  These jib killer delivery robots will serve rural and suburban markets with city residents for the sake of restaurants or small businesses.

Teleretail employs the system which has employed its peers and competitors -like Startship Technologies and Marble -for self driving cars. Sensors,  computer vision system and GPS aided navigation systems are employed. Some of the equipments snd components have been obtained from Bosch, Nvidia and Idar-makers SICK.

CEO of Teleretail,  Thorsten Scholl said the space agency funded the company  $2 million dye to its interest caused because of company’s usage of satellite data to help ground-based systems navigate around to pick up or to deliver items from retailers and residents.

“We think of ourselves as a consumer app that applies [robotics] to local logistics. We could envision a subscription-based model where a consumer can subscribe to the delivery service, or a store could subscribe to it in order to make deliveries that its employees cannot make in person.”

Empowerment of man street shops and small businesses is the objective of Teleretail, to make them able to compete with e-commerce giants like Amazon, CEO said, when it comes to convenience

“We also have a great drive to help seniors live well, independently, as they age,” he also added,  “This kind of technology helps them send their own kind of Mars rover out to drop off the dry cleaning or pick up groceries.”

The company demonstrated its technology,  recently,  at the AUVSI Xponential conference in Dallas,  featuring all the mannerof autonomous vehicles and drones.

Teleretail’s next task is to get its robots working with early pilot customers and partners in municipalities throughout Switzerland and the US.

Scholl termed,  “Washington D.C., Sunnyvale in California, and as of July, Idaho are allowing this. And so are some Swiss mountain villages. We’re exploring other possibilities and trying to help regulators figure out what to do about this, as well.”