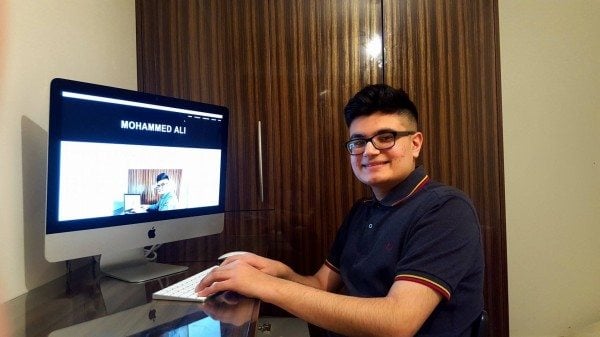 “Poverty in Pakistan will never end unless there is an investment in human development and modern technology. Pakistani government should be investing in the people and technology,” says Mohammad Ali, a British Pakistani student who rejected £5 million for the website he created in his bedroom in a short duration of only six months. He is confident enough about justifiable amount offers for the sale of his website.

In an interview, Ali expressed his hopes to get his website -weneed1.com- sold for more than the US company offered him. He is in contact with various companies to get more offers.

It is reported that Ali met a group of Americans in London along with his 60-year-old business partner Chris Thorpe, to discuss an investment,  but the Americans offered £5 million for his website. This technology enthusiast guy says about his website provides

“Real-time quotes instead of the normal pre-fixed quotes you find on insurance sites”.

Claiming his website is for the whole world, 16 years old A level British student termed his website saves money of consumers and gives advantage both the consumer and buyer,  protecting the privacy of users and visitors, unlike many other big giants. It also offers car and motor insurance with the facility to share properties,  rooms, everything to share and save.

He also said “It’s an algorithm that connects buyers and sellers together to help them save money. I am a proficient java and PHP developer and I was sure that this website is worth £5 million.”

Ali gives talks at hi-tech IT and programming events in London and elsewhere. He had been a guest speaker at Millennial2020 London conference.

Ali claimed almost 30 thousand users of his website a day who save their money due to price updating process on regular basis.

“I learned to program from youtube and books on my own. I developed this website within six months, it really has paid off though. My website protects data of consumers under the Data Protection Act 1998.”

Previously,  this brilliant boy earned  £40,000 after creating his own video game and a financial app for the stock market and now he is set to launch a price comparison site with Chris Thorpe.

As a reverse marketing platform designed to introduce buyers to sellers of goods and services in the UK,  Website was originally founded in 2009. Ali started coding the website after meeting his business partner during an appearance on BBC News in Yorkshire.

Ali’s future plan is to support charities with technology instead of money as technology is money and he also wants to build more innovative technologies to help create a better world.

He informed about his involvement with a firm to improve cyber security and said, “I do visit Pakistan occasionally and have already thought about investing in the next few years to improve its infrastructure.”