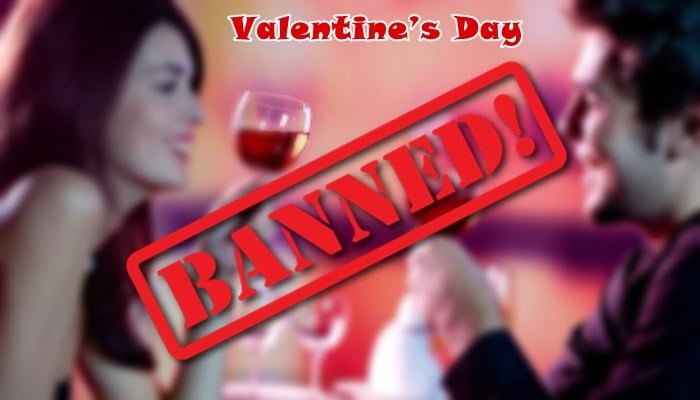 Valentine Day transmissions on TV & newspapers has banned by Islamabad high court. Finally a good decision has taken by Islamabad High Court in order to prevent the unethical activities on Valentine’s Day. Recently a notification issued by the Pakistan Electronic Media Regulatory Authority’s (PEMRA) Operation Wing has banned all the licensed channels and networks from promoting Valentine’s Day in Pakistan.

The order has been declared by Islamabad High Court following a petition (NO.541/2017) in opposition to the promotion of Valentine’s Day which was registered by an individual named Mr. Abdul Waheed.

Now, the notification has been sent and intended for to all Pakistani satellite TV channels, FM radio licensees, and distribution service licensees.

So it is clear the notification is issued for electronic as well as print media not to promote the transmissions and activities regarding to Valentine’s Day. The purpose behind this move is to prevent the immoral and wicked behaviors of youth on this day. Being a Muslim country we shouldn’t follow the unethical values and norms.

However, the petitioner’s, to their claim, alleged that Valentine’s Day should not be celebrated in Pakistan since it is not part of Muslim custom and tradition. The notification read;

Must Read: Apple patent points to a pencil that writes on flat surfaces, including air

“…In the meanwhile, respondents are directed to ensure that nothing about the celebrations of Valentine’s Day and its promotion is spread on the Electronic and Print media. No Event shall be held at official level and at any public place.

Chairman, Pemra is directed to ensure that all the TV channels shall stop the promotion of Valentine Day, forthwith.”

In view of that, the IHC has bounded all Broadcast Media and Distribution Services Licensees to “desist from promoting” Valentine’s Day hereafter.

Apart from print and electronic media, Valentine’s Day celebrations have been banned in all public places and official premises. From now on, Electronic and print media are not allowed to cover any advertisement or promotions related to Valentine’s Day.

Many people appreciated the move taken by Islamabad High Court and they shared their views regarding this issue by saying government should ban this earlier but it is good too that at least they took notice now.

Events like Valentine’s Day are distracting the youth from their paths and leading them toward unethical and immoral behaviors which will eventually destroy the culture and religion norms of Muslims.

Apple patent points to a pencil that writes on flat surfaces, including air

AKHUWAT – ON THE PATH TO ELIMINATE POVERTY