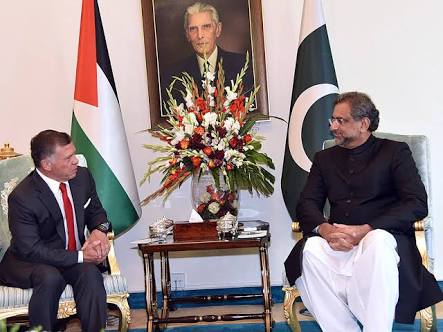 Pakistan and Jordan to enhance bilateral trade and investment ties

The understanding came at a meeting held on Thursday, between Prime Minster Shahid Khaqan Abbasi and King of Jordan Abdullah II Ibn Al Hussein in Islamabad.

The meeting was followed by delegation level talks between the two sides which reviewed entire gamut of bilateral relations & exchanged views on ways to further expand these relations in several fields.

Both the leaders reviewed regional situation, with particular focus on Middle East in the aftermath of recognition of Jerusalem by Washington the capital of Israel.

Prime Minister expressed Pakistan’s unequivocal support for just cause of Palestine & reiterated Pakistan’s rejection of the US decision.

Prime minister also briefed the visiting dignitary on the current situation along the LoC, Pakistan’s counter-terrorism efforts & its commitment to regional peace & stability.

King Abdullah II thanked Shahid Khaqan Abbasi for the warm welcome accorded to him & his delegation.

Earlier, on arrival at the Prime Minister office, a formal reception honoring King Abdullah-II was held. National anthems of both the countries were played on the event. A formation of 3 JF-17 Thunder Aircraft did present salute to the royal guest.

Agreement between Pakistan and Jordan in the Field of Civil Protection and Civil Defence; Memorandum of Understanding between the Ministry of Housing & Works of Islamic Republic of Pakistan & the Ministry of Public Works & Housing of Hashemite Kingdom of Jordan.

King Abdullah II is visiting Pakistan after eleven years. His visit is a reflection of close brotherly relations existing between Pakistan & Jordan.

King of Jordan Abdullah II was given a red carpet welcome when he arrived at Prime Minister’s House.

Earlier, President Mamnoon Hussain did receive King Abdullah on his arrival at the Nur Khan Air Base. 2 children attired in traditional dresses presented bouquets to the King.

A 21-gun salute was also presented as King Abdullah alighted from the special aircraft. A red carpet was rolled out for visiting dignitary & a contingent of Presidential Body Guards did present a static guard of honour.

The Jordanian King has been accompanied by a foreign minister & a number of civil and military officials.

Here is O’Connor’s idea for URA support for startups