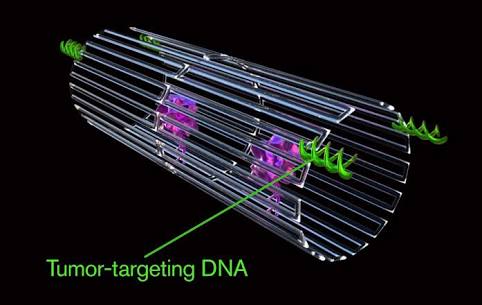 Cancer-fighting Nanorobots seek and destroy tumours. Robots that are Nanometre-sized, have been used for the first time in mammals for the delivery of drugs to the specific places to treat tumours. The experiment was successful.

“Blood-clotting drugs” that are used to tackle minor bleeding rather than as a cancer treatment, were being carried by nanorobots, that are made from origami-folded DNA sheets, to shut off the supply of blood to tumours in tiny part of the body.

Tumours, starved of their blood supply, started shrinking and the cancer’s ability to spread and grow in new sites also appeared to be decreased, doubling the life expectancy or removing tumours completely in some mouse cancers.

This demonstration marking a major step towards the implementation of nanorobot drug delivery in medicine, could pave the way for the delivery of toxic chemotherapy drugs with reduced side effects, among a host of the other uses.

He also said that this technology is a strategy that can be utilised for many types of cancer, since all the solid tumour-feeding blood vessels are essentially same.

Nano-machines used in this experiment use DNA fragments as a building block, very precisely folded, so to fit its purpose.

Must Read: Qualcomm flagship Snapdragon 845 is a graphics powerhouse

Fragments of DNA are arrayed in sheets, so that they can be zipped up to encase a drug payload, preventing it interacting with healthy cells & stopping short-lived drugs being broken down.

They do also require a release trigger which is a molecule that will only respond to a chemical signature on the outside of cancer cells, which does unzip the nanorobot exposing the treatment.

This study was published in the journal Nature Biotechnology a few days ago. According to this study, the DNA sheets were folded into a tube shape to encase blood-clotting drug, “Thrombin”.

The drug is utilised to treat bleeds after surgery but breaks down very quickly to target tumours.

The international team included researchers from China, Australia and the US. The team primed their nanorobots to release in the presence of the protein molecule, nucleolin, which coats internal walls of the blood vessels feeding tumours.

Within the duration of 24 hours of the treatment, the scientists saw blood vessels feeding the primary tumour site had been cut off with solid clots forming in all the tumour blood vessels within the next 72 hours –causing the tumour to start dieing.

The treatment was very effective in treating mice with melanoma cancers, which have a strong blood supply, where 3 out of the 8 mice treated showed complete regression of their tumours.

Life expectancy in the treated mice was 45 days, as compared to 20.5 days in those non-treated.

The team did also show that nanobots were also able to home in on breast cancers & shrank or reduced the size of less vascularised ovarian cancer tumours, & lung cancers.

Crucially, there were no clots formed away from tumour sites, or in key organs in heart, liver, lungs or kidneys, verifying that this treatment was only targeting cancer cells.

The nanobots are also useful in non-cancer treatment for targetting drugs to diseased organs or infections.