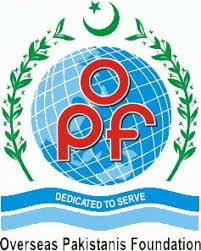 Overseas Pakistani Foundation (OPF) in the past has established various housing colonies where 100% land has been allotted to the overseas Pakistanis but a few pieces of land have been under the illegal possession of land mafia. Current Board of Governors and OPF Management with the help of district administration and police have been actively campaigning to regain possession of the land from the influence of land mafia.

Due to these untiring efforts, OPF in Islamabad and Lahore has recovered land worth millions from the influence of land mafia. With the grace of Allah, OPF has successfully completed all development works in its housing societies thus restoring the faith of overseas Pakistanis on the current government. Recently one of the most complicated issues pertaining to OPF Valley Zone V has been solved and possession has been given to overseas Pakistanis after 25 years.

Minister of State for (OPs and HRD) Mr. Abdul Rehman Kanju personally handed over the possession letters to the allotees in the presence of media.

This recent crackdown against the land mafia by OPF management has resulted in a malicious character assassination campaign whose prime objective was to shift OPF’s focus from the welfare of overseas Pakistanis.

OPF is credited for successfully establishing 10 housing schemes and 24 state-of-the-art educational institutes providing quality education for the children of overseas Pakistanis. Working under the leadership of the Federal Minister for overseas Pakistanis and Human Resource Development (OP & HRD), Federal Secretary (OPs & HRD) and the Board of Governors, OPF is coming up with new initiatives to further enhance its service portfolio resulting in increased effectiveness.

On this matter Ministry of Overseas Pakistanis and Human Resource Development, Board of Governors and OPF Management have adopted a unified approach to implement policies set by the Board in running the affairs of OPF.

OPF is a government organization whose matters are run as per the law and predefined SOPs. OPF has always appreciated the positive role of media and from time to time has shared its success stories with the journalist fraternity but will never succumb to the existing blackmailing tactics and will keep on striving to provide the best services to the overseas Pakistanis.