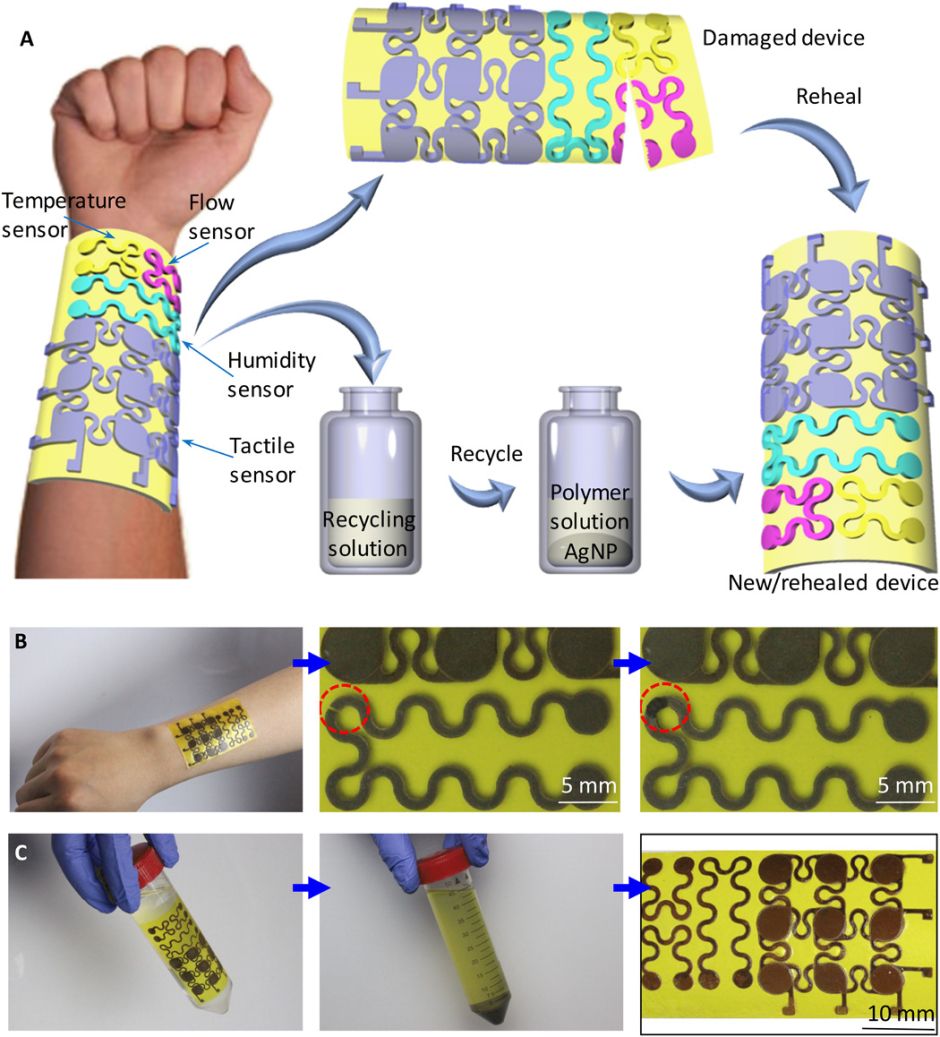 E-skin can help the future robots detect human body temperature. Researchers at the University of Colorado Boulder are claiming that they have developed the very first fully rehealable and recyclable “Electronic Skin”, or shortly known “e-skin”.

The technology introduced by Colorado Boulder researchers  mimics the functions and mechanical properties of human skin. Like human skin electronic skin is capable of measuring pressure and temperature, as well as vibration.

Electronic skin dates back to the year 2011, but this version of e-skin can be reused, by reducing waste and by manufacturing costs.

The very Electronic skin has a range of applications, from prosthetics to biomedicine which were previously detailed in the study published by Science Advances. Just imagine a prosthetic arm or leg that is wrapped in the electronic skin, allowing its wearer to be able to pay response to temperature & pressure changes.

E-skin has been made out of a polymer and silver nanoparticles, which enable it conform to intricate, curved spaces such as fingers or toes.

Perhaps the most remarkable application of e-skin (or its most disconcerting, depending whom you are asking) is in the world of robotics. Jianliang Xiao is a mechanical engineer at the University of Colorado Boulder and is the leader of the study, who says that e-skin could lead towards the safer interactions between humans and robots in the future.

He adds saying, “Sensing is critical because when human beings interact with robots, we want to make sure that robots don’t hurt people,” and “When the baby is sick, the robot can just use a finger to touch the surface…it can tell what the temperature of the baby is.”

That is quite right, folks: In the future, when robots take care of our children & the elderly, robots may get wrapped in an electronic skin that imitates our own skin, ensuring that they do not accidentally kill your loved one with too much or the too little force. The same concept is applicable to prosthetics: When some artificial limb gets wrapped in e-skin, it can theoretically sense when something is hot than normal or too cold, or if more or less pressure requires to be exerted on an object.

When damaged, the e-skin detailed in the study can heal itself. If it is damaged beyond repair, the e-skin can be soaked in a solution that is able to separate out the silver nanoparticles & then be fully recycled into a new and usable e-skin.