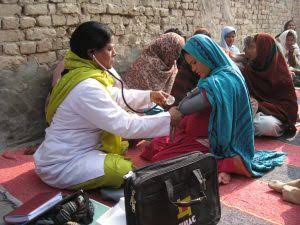 The report finds that 98.8 % of women from the poorest rural households are education poor (defined as having just completed 6 or less years of education), with rural Pashtun women not only being the most deprived in education but also have least say in decisions regarding their own health care.

Released 2 years after world leaders had adopted the 2030 Agenda for Sustainable Development, report — Turning Promises in to Action: Gender Equality in 2030 Agenda — examines all the 17 Sustainable Development Goals (SDGs) and shows their impact on lives of women & girls. It highlights how different dimensions of well-being & deprivation are deeply intertwined and suggests measures to tackle existing structural inequalities & turn promises into action.

Disaggregation by ethnicity did reveal further differences. In case of malnutrition (proxied by low Body Mass Index), Sindhi women & girls from the poorest rural households fare far worse than any other group across all wealth quintiles & locations.

However, most disadvantaged ethnic group varies across indicators, oscillating between Sindhi, Saraiki & Pashtun.

A close look at those most likely to be disadvantaged (that is, women in poorest rural households) suggests that in 6 of the 10 dimensions studied, Sindhi & Saraiki women and girls fare the worst while Pashtun & Punjabi women tend to fare better.

According to the report exceptions can be observed in some of the areas, like access to clean cooking fuel, where rural poorest were deprived irrespective of ethnicity.

On average, 48.1 % of women and girls aged between 15 & 49 years in Pakistan have no say in decisions regarding their personal health care, but rates do vary significantly by location, wealth & ethnicity. For example, women & girls in rural areas are 1.3 times as likely to report having no say in decisions regarding their own health care as those in urban areas: 52.5 % compared to 39.3 %.

The report recommends investment in accessible and affordable as well as quality early childhood education & care as an important strategy that could help contribute to the achievement of gender-and child-related targets of 2030 Agenda by reducing time women spent on unpaid care enabling them to increase access to employment, improving children’s health & nutritional outcomes.