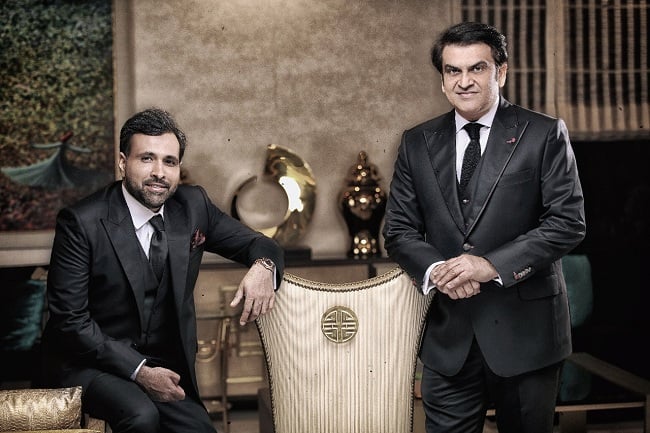 Another milestone achieved for Abdullah Kadwani&Asad Qureshi. The ace producers of the biggest entertainment company of Pakistan 7th Sky Entertainment and the brains behind the most talked about serial these days “Khaani” have accomplished another milestone by joining hands & have partnered with GEO Television Network.

Mr. Abdullah Kadwani is a renowned Pakistani Actor, Director, Marketer and Producer who brings decades of media related skill sets including performing arts, advertising, media marketing, sales and production. Starting out as the CEO of Media International a media events and public relations firm, he soon took over as the CEO in partnership with Pakistan’s biggest media services group, Interflow Group and launched its flagship company, ICON Media. He was also the CEO of Media Max and as part of the core team played a vital role in launching a leading satellite channel of Pakistan & was associated with them for 11 years…He is also the Founder of the premier broadcast and filmed entertainment company ‘7th Sky Entertainment.

Must Read: Samsung recalls Android Oreo update for Galaxy S8 and S8 plus as it was causing random reboots

Abdullah Kadwani has transformed the media production industry by introducing professionalism and culture transforming values. He ventured into not only productions, but direction as well and has directed many award winning Dramas. With a diversified portfolio he has been contributing substantially to the entertainment media industry in Pakistan. He has been a recipient of many awards including; Best Producer, Best Actor and Best Drama Serials.

He brings with him an unsurpassed experience of more than 25 years in the field of Television industry in Pakistan. His acumen has led him to create milestones, new channels, programming and ideas that have also earned him a reputation of a man of commitment, relationship and performance. He remains the only individual in the industry to have experienced 360 degrees of this trade winning him accolades and awards in recognition of the same. Today, he continues to do so with a proven track record of quality, performance, integrity and innovation.

Asad Qureshi has extensive experience and has played an instrumental role in bringing innovation to the Pakistan Media Industry. His passion for his work and belief in continued learning led to his selection in the AMP- Media Management Program at IESE Business School and UCLA. With his attention to details he identified the gap and true potential in the satellite industry enabling him to become part of the core team that launched the first Satellite channel- Indus TV Network in Pakistan. In 2001, he moved on to join Media Max as Director Operations, which became Pakistan’s premier and pioneering broadcast marketing company. Since 2004 he has been the Director and founding partner of 7th Sky Entertainment, Pakistan’s premier broadcast and filmed Entertainment Company, which has proudly bagged several awards and accolades in different categories for its various projects.

7th Sky Entertainment has produced over 100 projects, which range from drama serials, soap, tele-features and branded content for clients making it the largest independent content producing company in Pakistan.

CEO of Geo TV Network Mir Ibrahim Rehman on behalf of Team Geo wishes both Mr Abdullah Kadwani&Asad Qureshi the best of luck and hopes that under the leadership of the dynamic duo the GEO Entertainment brands will continue its journey as the leading Entertainment and drama content provider of Pakistan.

Be it an emotional roller coaster of relationships in “MuhabbatTumseNafrat Hai” or the ups and downs between a husband and wife in “Maan”, story of love and hatred in “GharTitli Ka Par” or a story of a rebel, love and revenge in “Khaani”, this super duo has always made dramas which top not only the ratings but our hearts as well and create waves everywhere. Their latest drama “Khaani” is the talk of the town while Khaani has become a remarkable character whereas the audience is just drooling over Mir Hadi.

“Our dramas are not only entertainment but they are also objective based &trendsetters, they are stories which are from the masses and for the masses and we make sure to create them with all our heart. It’s a pleasure to join hands with one of the leading channels of the country and we are aiming to set new benchmarks through this partnership” said Abdullah Kadwani.

Asad Qureshi also shared his happiness stating: “It’s not an easy task to make signature dramas like 7th Sky has been doing but requires a lot of hardwork and passion, and now as we have joined the leading entertainment channel we are more passionate about our work and will create top rating dramas in the future as well with the help of the talented team here at GEO.”

We hope that with the merger of such great minds, GEO entertainment will soon become the leading entertainment channel in the industry.

LG’s next flagship phone may tout an extra-bright, low-power screen