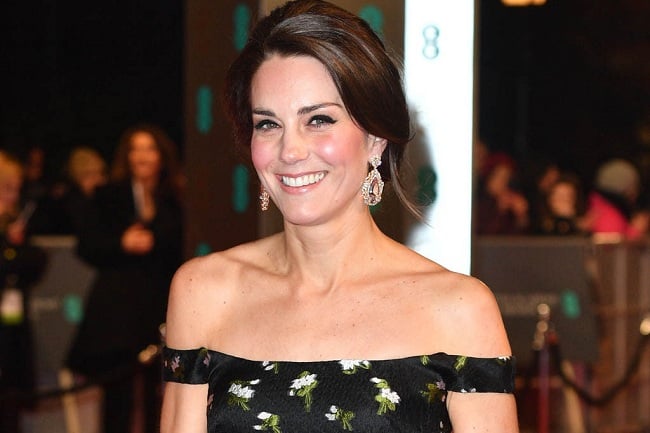 On Monday evening, Alongside Countess of Wessex Sophie, the stylish royal co-hosted the Commonwealth Fashion Exchange reception at the palace. The fashion initiative saw designers & artisans from 52 countries of the Commonwealths create one-of-a-kind sustainable outfits showcased at the reception.

Kate looked to opt for a black-and-white lace floral print dress by Erdem, while Sophie loved a black dress with red detailing from Burberry.

Kate and Sophie are known to be the most fashionable members of the royal family. With a keen eye for feminine tailoring & elegant formalwear, Sophie’s choices get compared to Kate‘s. Both are fans of the British designers Erdem, Emilia Wickstead, Alexander McQueen and the milliner Jane Taylor. Both own famous L.K. Bennett nude pumps.

Kate, seven months pregnant, made headlines on Sunday for her dress choice for the annual BAFTAs. The royal got criticized for walking the red carpet in a deep green gown with a black sash after the attendees got encouraged to wear all black in support of the Time’s Up movement.

Royal family members steer clear of political issues, some critics took to social media for expressing their disappointment that the royal mom did not show support for the women’s movement.

Both the royals made their way into The Music Room where a selection of stunning dresses were on display.  Sophie handled the fabric of a dress that was made by Lucian Mathis, followed by Kate.

Then went their separate ways to meet & greet the designers and collaborators.

Kate chatted with Nigerian designer Nkwo, who said she was fascinated to learn about the heading process & how long it had taken her. She explained to her that everything had been hand sewn and the only time a machine was used was for lining. She could not believe it.

Having sponsorship from Swarovski, The Woolmark Company & MatchesFashion.com, established designers like Karen Walker, Stella McCartney and Burberry, were among the designers & artisans showcasing their work.

All of the outfits will be displayed at a public exhibition at London’s Australia House on February 21st & other various London locations in the run up to Commonwealth Heads of Govt Summit in April, before heading to New York in September 2018.